I`m thinking Dani Ceballos. Clearly they won`t be starting here. So why would they just swap one bench with another?

Management seems to prefer experienced over younger, that can deliver in when subbed in. This Henrikh Mkhitaryan transfer would scream of "Il nuovo Borja Valero".

I posted it some months back.

Raiola kinda asked us about the possibility when we instructed him to find a new team for De Vrij.
E

Harpsabu said:
Gundogan to be a free agent this summer. Would definitely be worth a few years
Click to expand...

Sorry but Gündogan is contracted until 2023. He became a rotational player and Man City would listen to offers. I highly doubt he would join our bench for less money.


pazza moratti said:
Morata loan also end this summer? Juve paid his loan €10m and he has €35m option (€45m) total. I think Juve will take him as the loan fee was so high?
Click to expand...

Juve wasted €20M for LOAN of Morata they already informed Morata that they will not activate the buy-out clause. Morata is backup for Barcelona in case they fail to sign Lewandowski.


sdvroot said:
Inter, an important throw on Asslani in recent weeks: there is the idea of a swap with Radu (the Tuscan will lose Vicario, who should go to Fiorentina).
Click to expand...

Good idea but Empoli president confirmed AC Milan are ahead. They have already spoken to the player`s entourage and willing to buy him and let him develop at Empoli 1 more year. Let`s see if Ausilio can break a deal with them.

Nah, it means we are looking for quality squad depth because Vecino & Gagliardini suck and Vidal is past it, so will be shipped off.
OR
It could also mean that his agent is trying to gain some leverage in the contract extension negotiation with AS Roma...

However given the current financial conditions, he seems like a reasonable fit for the management. Anyone knows how much Mhiki is currently earning?


The advantage with Frattesi is that we could (in theory) get a better deal (deferred payment) with Sassuolo than clubs outside Italy. Throw some players in the mix and bum, Roma`s 15% has been reduced

Best Football Poster
I am always in favor of investing in youngsters. I just don't know if the kid is ready for a top club. He started playing professional football this season. Hopefully he's worth the hype.

smh inter reminds me of a chick in high school.

No one paid attention until she came back in the new year, had a make over and lost weight. Every bloke, including myself tried to pop that cherry.

Inter doesnt realise what they have in Barella and if he goes on the market it would be another sad day to remember on our way to mediocrity.

Three big European clubs are interested in signing Inter defender Alessandro Bastoni and the club are willing to listen to offers, according to a report

Inter Have An Agreement With Bremer But May Need Torino To Accept Pinamonti As Part Of The Deal, Italian Media Report

Inter have an agreement with Torino defender Gleison Bremer but may need to use Andrea Pinamonti in the deal, according to a report in the Italian print

I don't think they are lazy. I think they have so much at the table they need to have many routes to pick when the decision time comes regarding different positions. It's a huge complex mess.

Like brehme said one of the ways clubs operate these days is ask agents/agencies to find proper player for them.

Best Football Poster
Isn't this the definition of being lazy? If you wait for an agent to suggest players then what's the point of having a scouting department? I realize this is one of the ways clubs operate these days. Player trading with agents. But personally i hate it.

10 years of FIF
Our management have their hands full of tasks this summer anyway. So much to sell, look for players to sign. We need to probably (hopefully not) sell big and also sell lower value deals. We need to sign new players, mostly for free or cheap. That's never easy and takes time, preparation.

If we pay promise him 4m or something like that, then it obviously makes ZERO sense. But let's wait if there is really anything into this. 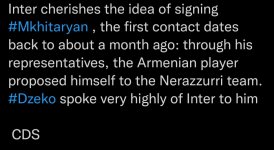 I’ve gone through ideas in my head who could be a low cost option for calhanoglu and I cannot go further than Mkhitaryian. He is exactly the profile our club follows, and I would be perfectly fine with him as 5-6th midfielder. Give me Maggiore/Grillitsch, Frattesi/Sabitzer/RDP, and Mkhitaryian and we’re set in midfield.

Forum Supporter
From RDP and Frattesi we went to fucking Mkhitaryian. Typical Inter

varmin said:
From RDP and Frattesi we went to fucking Mkhitaryian. Typical Inter