Forum Supporter
10 years of FIF
Hopefully he is a 7 or 8 player but im not sure if he will be better than a 6 to be honest. Lets hope for the best but i still think Handa will be number 1 for now.
G

Not better than handanovic. Prove me wrong

It's not easy to be better than Samir. Onana has to work really hard to get the spot at first 11.

cloudq said:
9, honestly, he's got the tools to be top 5 GK in europe

i don't know why we're even arguing whether he should be replacing handanovic in goal
Click to expand...

Think the reason is that after his ban he was a bit shaky and he has only played 10 games last season due to a 9 months ban....

Dudes gonna need a bit of time before he s back to his best.

10 years of FIF
FIF Special Ones
The issue is how is he supposed to get confident and match fit playing part time since Handa is the starter.
Last edited: Jul 14, 2022

Forum Supporter
He probably should start and play the majority of minutes for the next couple of matches. As Inter gets closer League play, we'll see him with more of starters as well especially vs Lyonnais and Villarreal. 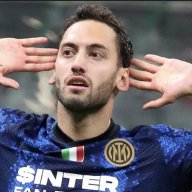 This guy knows he is currently the better keeper. Handanovic can’t pull off the saves Onana can nor can he play with his feet the same.

That confidence Onana projects is also important for the defence. Once he is settled into the team, Inzaghi won’t have a choice.

Onana has always been an excellent shot stopper. That's his main selling point. How succesful he becomes will depend on all the other stuff. Can he be authoritative? Can he organize the defense? What is his do or die decision making like? I feel like Handa is still the most secure option in that respect, but Onana will need to fill that void sooner rather than later.

10 years of FIF
Does anyone think Onana talks too much?

For a new arrival, he should not be talking about the Scudetto: more work less talk.

10 years of FIF
Nostradamus
I'm more surprised that FIF didn't go ballistic after he conceded a goal in statue-mode.

10 years of FIF
Most Diverse Poster
You are turning into kurt with comments like that. Do you just copy paste this from previous posts? I hate talking about this...again

To rehash the previous debates. There are statue mode situations that are understandable, caught on the wrong foot, etc... those happened to Handa too. But there are also times when a GK inexplicably just stood there instead of making a move, either forward or throwing himself in some direction, when the attackers only just came into a dangerous area. Handa isn't the only one that does this, but he does stand his ground too many times, maybe that makes him more confident, because he makes mistakes when he goes out of the first box in front of goal. And just to be clear - as far I am concerned I don't really rate Onana as a better GK than Handa anyway. The only thing Onana obviously has over Handa are reflexes, which obviously makes sense, he is younger, Handa isn't really good at reacting when the ball goes towards his head.

I know I started this some years ago and maybe some posters point the finger at Handa too frequently when Handa's Statue Mode happens, because it really isn't his fault every time. You also know I've been pretty impressed by Handa the last two seasons, he actually has some other problems nowadays (sometimes it's concentration, lack of strenght and determination), but overall, Handa-Skriniar-De Vrij-Bastoni were an impressive unit most of the time.

Also people aren't too mad because it's a friendly. I'm sure when it's points on the line, people will go mental beyond help. But this kind of posts are beneath you, Brehme. You are too good of a poster to do this.

Puma said:
Does anyone think Onana talks too much?

For a new arrival, he should not be talking about the Scudetto: more work less talk.
Click to expand...

No, it's his personality. He is being himself. I would be more worried about him if he was subdued.

Forum Supporter
10 years of FIF
I'm really excited bout this guy, I just like his presence and he seems pretty secure and his ball distribution seems top notch.

He will probably concede some stupid goals here and there, but overall, his contribution as a GK will be solid and we will win lotsof matches thanks to his saves. I'm glad we signed him, more so for signing him for free.
B

How about giving this guy a shot against Cremonese? I mean, it's fucking Cremonese. Or does Handa have Inzaghi's balls in a vice?
K

brightbackground said:
How about giving this guy a shot against Cremonese? I mean, it's fucking Cremonese. Or does Handa have Inzaghi's balls in a vice?
Click to expand...

This dude was shit in all the friendlies he played so he is not a starter.