Dortmund now getting beat 2-1, they are so theatrical right now.


Il Drago said:
No idea how Dortmund are so high in the standings. They have been playing awful football this season.
Click to expand...

It takes a great deal of choking to lose to Hertha and somehow Dortmund have managed it.

10 years of FIF
Forum Supporter
Most Passionate Member
Lost me 120 bones the bastards.

10 years of FIF
Season over.

Il Drago said:
It takes a great deal of choking to lose to Hertha and somehow Dortmund have managed it.
Click to expand...

If Inter had the kind of luck Dortmund has been having with injuries this season Inter would likely be mid-table right about now.

Bascially Dortmund management decided to forgo competitiveness in favor of frugality and this is the result. A weak and incomplete squad. 4-5 months in and i have no idea what Rose's game plan is, i don't think the players do either. Malen has largely been a flop, Haaland looks disinterested, Hummels and Witsel are past it, Can was a waste of money, and so on and so on. There is still an opportunity for at least one trophy tho.

Sawyer said:
Lost me 120 bones the bastards.
Click to expand...

Lmao their odd wasn't even that good to begin with, wasn't it something like x1.6? Almost put Dortmund in my parlay thank goodness I didn't

brakbrak said:
Lmao their odd wasn't even that good to begin with, wasn't it something like x1.6? Almost put Dortmund in my parlay thank goodness I didn't
Click to expand...

Their odds were dogshite to be fair I got them at 8/13, they were down as one of my accumulator certs... I do a European and UK accumulator and won my UK so I'm up £90-100 profit.

Best Football Poster
End of first round at Bundesliga. There have been some surprises, mostly negatives, but things are, more or less, as expected. 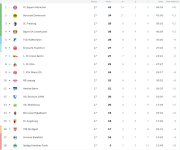 At the start of the season i had said this:


Il Drago said:
Still early days and it could be more of a wishful thinking than a realistic expectation but there are ggood chances we could finally have an exciting season in Bundesliga. It's going to be a transition season for many teams. I don't remember the last time so many top teams started the new season with a new coach. Bayern, Leipzig, Dortmund, Wolfsburg, Eintracht, Leverkusen, Gladbach.

Nagelsmann at Bayern is going to be very interesting as their squad is unfit for his favorite back 3 formation. I believe he will go for a 4-4-2 at the start of the season though there's plenty of time left in the transfer market so we will see.

I am also curious to see what Fredi Bobic, the mastermind behind Eintracht success, can do at rich but mismanaged so far Hertha Berlin.
Click to expand...

Sadly it was wishful thinking. Most of those projects haven't really worked and we're watching more of the same.

The projects of Leipzig, Wolfsburg and Gladbach have gone terribly and they find themselves in bottom half after the end of first round. Leverkusen are the typical Leverkusen that will field exciting talents, fight for a CL place but fail to rise to the challenge for anything more. Thankfully there are few positives to keep a slight interest for this season. Freiburg have built a very exciting project, both in terms of squad and infrastucture, which have pushed the team to take the next step and fight for top 4. There's a resurgence of Hoffenheim who are at their best shape since Nagelsmann left. Union Berlin have picked up from where they stopped last season, embarrassing the "big" club of the capital even further.

Eintracht also deserve a mention. That club has a die hard mentality. People have often been fast to rule them out but they have always proven them wrong. They have gone through many changes in recent years but they have managed to recover. They lost Kovac to Bayern and they still managed to stay competitive. They lost their attacking magic trio of Haller-Rebic-Jovic in one summer and they even managed to improve by turning Andre Silva into a top scorer. Last summer they lost both their coach and sporting director and after a poor start they have made an impressive run with the end of first round finding them just one point behind 4th place. Really impressive.

The fight for first place is basically over but hopefully we can have some entertaining matches for European places in the second round.

10 years of FIF
Most Diverse Poster
Gladbach is pissing me off.

Bayern should top all of these charts, absolute farce of a league. 1 team v 17 fighting for 2nd place.

Best Football Poster
I hear this argument very often so i only want to ask this. How many European clubs would beat Bayern in a title fight? It's quite telling less than a month ago the majority of the forum of Italian champions and league leaders were shitting their pants at the thought of their club facing Bayern in CL.

Il Drago said:
I hear this argument very often so i only want to ask this. How many European clubs would beat Bayern in a title fight? It's quite telling less than a month ago the majority of the forum of Italian champions and league leaders were shitting their pants at the thought of their club facing Bayern in CL.
Click to expand...

PSG, Real Madrid, Man City, Liverpool would all be competitive and either of those could top them, or not.

Inter, Chelsea, Ajax, Atletico would be competitive with them, a lot closer than the league prevails.

However I submit that your point is a very good and if I am brutally honest, I have never thought about it this way, so kudos.

10 years of FIF
Nostradamus
German teams get very underrated as a result of this Bayern dominance. Same way Spanish teams were underrated when Barcelona and Real Madrid would score 100 goals and get 100 points in the league, yet clubs like Atletico, Bilbao, Villarreal, Sevilla and Valencia could pretty much beat everyone in their EL paths as well.

We lost to Frankfurt for example, who should have reached the final that year, although granted we were a mental less at the time. We lost to Dortmund, Gladbach wasn't easy and Leverkusen definitely wasn't easy either.

10 years of FIF
Most Diverse Poster
Exactly, there is something about German clubs that need us to be truly world class and in form to actually beat.

wera said:
Exactly, there is something about German clubs that need us to be truly world class and in form to actually beat.
Click to expand...

We do reasonably well vs German teams lately. Spanish teams though, they put some spell on us or something, we have 1 win in last 10 games vs them and it was against mighty Getafe.

They stopped doing it since last season. I guess as a precaution for any possible postponements due to covid.

Best Football Poster
It's hilarious Gladbach can lose to anyone, literally anyone, but they always find a way to get points from Bayern.

Forum Supporter
SGE has been the biggest surprise so far. It is amazing how they can again build an entertaining team for a very limited transfer amount. Also great to see how the betrayal of Fredi Bobic hasn’t had a negative impact.
You must log in or register to reply here.
Share:
Facebook Twitter Reddit Pinterest Tumblr WhatsApp Email Share Link
Top