Forum Supporter
10 years of FIF
What a shitshow this has becoming. A club like Inter and we are humiliated by the crypto scammers. Pirelli bosses are watching these and they are sad, not happy.

This club is barely afloat like Kate in Titanic.

All i know is, whoever got us into these crypto sponsorship deals should be fired right away. It would have been better if they stayed underpaid by Pirelli than to make deals with cryptoshit.

This club is beyond pathetic smh

Forum Supporter
10 years of FIF
I loved Pirelli on our jerseys as much as Everybody else but we had to move on as they simply weren’t giving us the money we needed.

That being said, the crypto route was definitely a wrong move.
P

10 years of FIF
Perelli‘s Inter sponsorship was iconic. They got great exposure that was worth far less than they were paying Inter.

What surprises me is that they did nit attempt to fight to remain our main sponsor by increasing their offer.

When you think about it, the deal we had with them had been locked in for so long that by the time it expired, it was significantly low by modern standards. Why not make a new offer to keep the relationship going? Or is it the case that the Zhang’s simply wanted to go in a new direction? It would not be the first time that the Zhang‘s overvalued Inter thinking they could get a better deal.
Last edited: Aug 6, 2022

I wouldn't be suprised if Zhangs wanted Pirelli gone for the sake of change, to fit in with the whole "rebranding" thing. New logo, new shirts that aren't exactly striped, no Pirelli etc. It's as if they intentionally wanted to visually disassociate with everything old, a complete overhaul of aesthetics.

I will never understand rebranding and radical changes like this, you agitate old fans and don't attract a whole lot of new ones. There are better ways to reach out to new people in the era of social media.
F

Puma said:
Perelli‘s Inter sponsorship was iconic. They got great exposure that was worth far less than they were paying Inter.

What surprises me is that they did nit attempt to fight to remain our main sponsor by increasing their offer.

When you think about it, the deal we had with them had been locked in for so long that by the time it expired, it was significantly low by modern standards. Why not make a new offer to keep the relationship going? Or is it the case that the Zhang’s simply wanted to go in a new direction? It would not be the first time that the Zhang‘s overvalued Inter thinking they could get a better deal.
Click to expand...

It was so iconic, after 20 years on the shirt, Inter fans still can't spell Pirelli properly...

10 years of FIF
Nostradamus
Pirelli has insane exposure in motosports. They also got a lot of exposure from Inter especially during the late 90s to early 2000s when Moratti was spending like crazy and we had top players like Ronaldo, Vieri, Zanetti, Pagliuca, Simeone, Seedorf and so on. After a while it became automatic, people assumed that there was some symbiotic relationship there.

But Pirelli does not need Inter to sell their shit. From F1 alone they receive more than enough exposure. They also sponsor the Ice Hockey world championship which probably covers a population that doesn't care much about F1 (central and northern Europe, USA, Canada and Russia) Inter was more like a childhood derived gesture from Provera.


And for the most part, their sponsorship deal was one of the highest in the world. That changed when FFP was implemented and teams started to use some sort of money laundering practices (or government sportwashing) to fill up their revenue streams.

Until the late 2000s, Pirelli was probably amongst the top 5-10 of sponsor deals for the most part of the decade.

Then in the 2010s you had Fly Emirates (UAE), Qatar Airways (Qatar), Etihad Airways (UAE), T-Mobile (Germany), Gazprom (Russia) from government deals and the PL was flooded with betting company sponsors. Juventus started using their owners' company on the shirt, which was a practice used by others as well, since they couldn't pump money otherwise. Teams like PSV, Leverkusen, Wolfsburg, Hoffenheim, Sassuolo, Leicester etc did this.
Some teams like us, kept regional businesses sponsoring for the most part, like Inter, Dortmund (Evonik), Parma (Parmalat) etc

The main "normal" companies that were sponsoring sports in the 2000s were the likes of Siemens, who are pumped by the German government as well, Samsung with some other Asian electronics companies, telecommunications companies and big beer companies like Carlsberg, Heineken etc, car companies or some banks until the mid/late 2000s.

It was a much more normalized period for shirt sponsorships. And Pirelli was amongst the gods. The reason was that Pirelli was also quite unique to us, I don't recall another side having Pirelli as sponsors, but Milan for example had Open and then B-Win before switching to Fly Emirates which was shared with Chelsea, Arsenal, PSG, Real Madrid and a few others in that chronological order. They also shared B-Win with Real Madrid iirc.

So Pirelli made Inter's jersey unique as well, we shouldn't underestimate that. So you felt that there was some special relation there. I'm not going to say it filled anyone with pride, but when you consider that a company just throws money at some team and yet here you are with a family business that sticks with you for a couple of decades, it just rings differently.


Nowadays there's not as much interest in keeping up with the prices so you still see betting companies, crypto scam platforms and the typical government sportwashers. Betting companies sponsoring teams are illegal in Italy iirc, I've no idea why crypto platforms still aren't since CFD providers are capped for a minimal amount and cannot be anything more than a relatively silent partner, so I trust that they'll soon ban Binance, Crypto.com, Digital Bits, Socios and whatever other shit Serie A teams and the league have as main sponsors now. And Italy is not really in luck with getting these government sportwashing deals. The big Italian businesses aren't interest in football either because it's corrupt or because their customers have nothing to do with the sport. I cannot see companies like Ferrero or Prada sponsoring a top side anytime soon, unless one of their heirs is a fan of a team and wants to buy it and just uses this as a means to pump funds into the club.
P

10 years of FIF
Thanks for pointing out my spelling error Shit Lips. Apologies, as I was typing on an iPad and was being rushed by my four year old.

Forum Supporter
While Stevie is using an iron to melt off the "major shirt sponsor " label for Inter's starting eleven, is there a "new" and reliable company that pays upfront on the horizon? If so, the current labeled shirts should sell like hotcakes due to the novelty if nothing else, brilliant!
M

Universe said:
We can't do that. The shirts will have already been manufactured in bulk with digitalbits.. Doing a massive recall would be insane. That said, I hope we do it. I despise all these fucking crypto shitters anyway and it would be an abject disgrace to have their logo on our shirt if they haven't paid.
Click to expand...

I think, it can be very easy solved. Sue them for full amount and damages. Their accounts, all over the World will be blocked. Why wait and how long to wait?

Mikele said:
I think, it can be very easy solved. Sue them for full amount and damages. Their accounts, all over the World will be blocked. Why wait and how long to wait?
Click to expand...

That's not how lawsuits work.

Roma revealed their away second jersey today and they are also sponsored by the digitalbits. Wouldn't surprise me if they also face problems with them.

soon at Inter as well... wait, actually our training jersey is dark as well... gues we will be the first club playing without a shirt. Yellow cards for everyone at the start.

gds saying that Inter will show their second jersey today.

lol and here it is 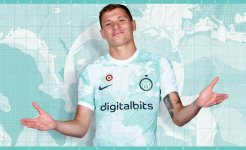 What in the towel is this

Forum Supporter
Meh, I don't mind it. But UEFA won't let us use it as it is for CL.

forzainter257 said:
What in the towel is this
Click to expand...