10 years of FIF
FIF Special Ones
Any idea how long he is out?
K

thatdude said:
Any idea how long he is out?
Click to expand...

10 years of FIF
That would be not too bad, a serious hamstring injury can keep you out for 2-3 months, and given he was crying I expected the worst.

10 years of FIF
Forum Supporter
Most Passionate Member
I would say minimum 3 weeks, he went for an MRI today hasn't he?

Hoping on good news for him.

yea, he'll be gone until January. Good thing is that we play Cagliari, Salernitana and Torino before the break. So lets just hope Alexis can stay healthy.

10 years of FIF
I said till the last day of mercato that Inter should have signed another forward like Keita Balde when he was available for cheap (eventually joined Cagliari for free).

We were already aware of Sanchez injury record, and now with Correa out and Lautaro having fitness issues just some days ago we better hope we have enough strikers to play till the end of the year.

10 years of FIF
Most Diverse Poster
Perišić as a striker, with Sensi behind him. We have the means, don't worry

Yeah, I was all up for Keita Balde as well, shame we didn't go for it, but what can you do, eh?

NimAraya said:
I said till the last day of mercato that Inter should have signed another forward like Keita Balde when he was available for cheap (eventually joined Cagliari for free).
Click to expand...

I was also pushing for Keita Balde but whenever I've watched him this season he's had one decent game then he's rubbish rest of the time. I don't know whether he's just phoning it in/disinterested or he's just out of his depth at this level. Great striker of the ball but useless at everything else. He's had opportunities at Lazio, Monaco, Samp, I think it's a mentality problem, he doesn't apply himself 100% which is a shame because I think he has the tools to excel at a higher level.

Agree also. 20mil Max. But who could we have got at a similar level? Been watching Cunha lately, looks like a bargain player at 30M, plays with intensity, can play across the forward line, is keeping his attitude in check, he's really settled well at Atletico, but goal-wise he's not coming through as needed.

Good news. He started training with the team. So did Darmian. They will still probably be out until January, even tho Darmian could play vs Torino if needed.

10 years of FIF
Most Diverse Poster
Fucking finally. I'm afraid he's the next Sensi, being injured most of the time. 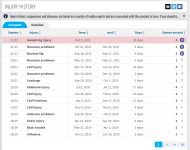 Best Football Poster
Correa option just turned into an obligation by Inter getting the first point in 2022.

10 years of FIF
FIF Special Ones
He actually pressed today. Not much else to take from his performance. The shot was funny but it was down to the pitch at Meazza. Happy he’s fit, we do need him.

10 years of FIF
Please make it Correa-Sanchez, both rotating constantly, it makes much more sense.
Dzeko-Lautaro too. So one pure 9 and one second striker (Sanchez or Correa)

10 years of FIF
Why'd we sign this guy? What a waste

10 years of FIF
As much as I can see the difference between him and Pinamonti, I cannot justify his price tag. Why is he so timid on the pitch!?

When he used to score, you guys were asking why I still complain about his aerial ability when he's 1.89m tall. Does he look like he could be our target man?

Grandpa Dzeko was pressing the opponents till he was subbed out. Sure it's goal drought for him too but at least we know what Dzeko's been doing on the pitch. Had we knew this is Correa's level, we might as well just save those 30M to spend on Sanchez and Perisic's wages.

It's always like that. Quaresma for Mourinho. Vidal for Conte. Correa for Inzaghi.
Last edited: Jan 13, 2022

Very disappointed with him, so complacent. Maybe not good enough for Inter. He acts as if he's TOO good for us, ironically.

he needs to get rid of the ball much faster.

10 years of FIF
FIF Special Ones
Looks low on confidence. Every time he had a good match he gets injured. He hasn’t been able to get any momentum going this year. If he stays hit he can help us in the right moments.
You must log in or register to reply here.
Share:
Facebook Twitter Reddit Pinterest Tumblr WhatsApp Email Share Link
Top