10 years of FIF
He signed for Monza, a Serie B team. Its sad how low he's declined from a national talent to a serie b player as I've always liked him.

delaurentis said:
Apparently he signed with Romanian side FC Cluj.

I don't predict this will end very well.
Click to expand...

Source? CFR Cluj or "U" aka Universitatea Cluj?

I think I would have heard something like that!

Monza CEO Adriano Galliani assures ‘this is truly the last, absolutely last, completely the last chance’ for Mario Balotelli, as he joins the Serie B club for six months.

Currently a free agent and with Vasco da Gama confirming they offered him a deal, Balotelli seems to have decided to start again in Italy’s second division with a newly-promoted club and some familiar faces.
Monza are owned by ex-Milan President Silvio Berlusconi, with coach Cristian Brocchi and players including Kevin-Prince Boateng.

“I gave him a proper talking to, and told him this is truly the last, absolutely last, completely the last chance,” Galliani told La Gazzetta dello Sport.
“I do love Mario, he’s a player with the kind of technical and physical qualities that should’ve allowed him do so much more with his career.
“There were flashes of exceptional quality and I can’t understand why he can’t get even better. After all, he is only 30 years old.”
The contract is short-term, until June 30, 2021, once Balotelli has passed his medical.

It seems an odd choice, considering during his time at Milan, Berlusconi had called Balo a ‘bad apple’ in the locker room.
“The President is enthusiastic, he gave me the all-clear, I passed Mario over to him on the phone and they had a talk,” continued Galliani.
“The boy treated these talks like a friend. He accepted a lower salary with some variables that are based on performance, appearances and promotion into Serie A.
“His agent Mino Raiola also took no commission. Mario gave up a very important contract he could’ve had in Rio de Janeiro with Vasco da Gama.
“He’s been out of action for a while, so it will take a few weeks to get him into shape. Finotto tore his ACL, so we needed another striker and I found him in Mario Balotelli.”

This is a six-month deal, but could there be an extension if Monza are promoted into Serie A?
“We’d both be happy for him to continue.”

“I still believe in him, Mario is a good boy. I noticed all his availability,” he told La Gazzetta dello Sport.
"I told him: 'Do not trust the flatterers. If necessary, you will hear my reproaches. But they will be for your good'. And in his eyes I read the understanding, the one I was looking for.

“The injury of [Mattia] Finotto had left us without a centre forward for the rest of the season. I spoke to Berlusconi about Balotelli on Tuesday. He told me to go ahead, he gave me carte balance,” he continued.
“Both Christian Brocchi and the director of sport Filippo Antonelli shared this choice.
“Mario and Mino Raiola have been available, Mino renounced any commission," Galliani revealed.
"We knew we would come to an agreement. So much so they told me to decide the figures of the contract.

this "kid" is a 30 year old adult, not some 20ish talent who has still a shot at making it big.:trollol:
N

I like him as a player and person. In someway I think the media does run a negative narrative based off his past.
His rep runs ahead of him a lot ! But anyway I wish for him all the best
I want to see a happy succesful Balloteli

Forum Supporter
10 years of FIF
What makes me happy is that, at the time, we were worried that by selling him that we’d lose out on money if he became the next best thing but it never happened. I’m pretty sure what we sold him for was the most he ever went for.

There’s no doubt that the media didn’t help but at the end of the day he only has himself to blame for not being able to achieve his own full potential. It’s not like he didn’t get the chances.

That said, he’s rich and I think he is happy enough with that.
G

i'm happy to see Balotelli signing for Monza. This is REALLY his last chance to do something good in his football life. Good luck Mario.

10 years of FIF
Scored his first goal in his debut 5 mins into the match. Granted its a serie B game and a tap in but I'm happy for the guy.

Goldenboyv88 said:
i'm happy to see Balotelli signing for Monza. This is REALLY his last chance to do something good in his football life. Good luck Mario.
Click to expand...

His last chance was 6 years ago at Liverpool. Since then football has been just a hobby for him, and I am glad he can enjoy his favourite pastime at Monza these days.

10 years of FIF
He gave up football many years ago, no reason to discuss him any more.

FYI Monza forward Mario Balotelli reportedly suffered an injury before the match against Lecce and is not even on the bench for the Serie B match today. He is out of shape, as you can imagine.

10 years of FIF
NOt that anyone cares but: 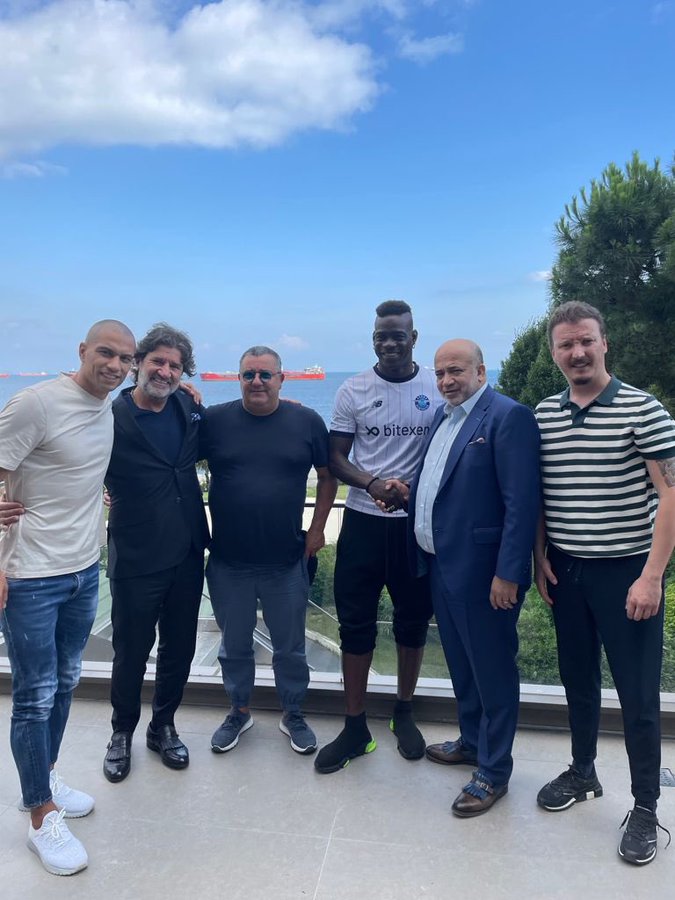 Fools gave him a 3 year contract

he will be gone in 6 months

This is also a reason why players love Raiola. Look at that fat pizza owner taking care of his trash.
P

10 years of FIF
The above video made me laugh. Anyone notice around the 33 second mark when he is celebrating a goal with Santon and was being kicked by Cordoba and another player (looks like number 12)?

Forum Supporter
10 years of FIF
Best Overall Poster
Most Humorous Member
FIF Special Ones
It's #13 Maicon. #12 was Julio Cesar at that time.

Balotelli is being Balotelli This is the reaction when his coach took him out from the game tonight.

10 years of FIF
I have a mate that is a Manchester City fan. He thinks that given what Balotelli achieved early in his career with Inter and Manchester City, that he had nothing left to prove.

I am not sure what you guys think but I always thought he wasted his potential and career.

Just a as a side note, I think Manchester City and PSG supporters are complete cocksuckers.
Last edited: Aug 29, 2021

I don't think it's that. The guy has a lot of problems, he had issues with the media in Italy, and it got significantly worse when he was in England. That stuff fucked him up for sure. A lot of stuff is on him of course, but I wouldn't say it was due to achieving a lot early on. He moved to his favourite club (Milan) and things seemed to be on the up for him for a while. I don't remember how it ended there for him but I can only assume it was due to something he did or his general work ethic.

When it comes to Balotelli it's hard to pinpoint what exactly happened to his career as it's definitely more than one thing.