10 years of FIF
First half he was a bit shaky at times, lost the ball with some of his passes, got dribbled by Solomon (is that how u spell his name?) and still he got the Motm award, just shows how good he was in the second half.

Forum Supporter
Solid game for the most part, glad he got some rest prior to today. He'll need to be in top form for the next several matches.

10 years of FIF
There was a moment in the first half where he was clapping on and encouraging Barella. I think the latter was frustrated that he had not taken the opportunities with which he had been presented. And there was Skriniar clapping and encouraging him to keep going.

10 years of FIF
Yeah, Skriniar has the aura of a captain, everything he does. Barella doesn't feel like that kind of player, at least for now. Barella is too intense, gets frustrated way too easily (though he keeps on going play after play, never gives up).

10 years of FIF
Most Serious Member
Most Stubborn Poster
Don't make it a competition, there's no need.

We used to have Zanetti, but you also had Cordoba, Materazzi, Cambiasso, Samuel, Figo, Stankovic, Vieira later on Lucio all of which were captain material. And most were captain of their national team and/or at a previous club.
If everyone is on board and there's no friction, that's great for a team.

10 years of FIF
Yeah, I'm not making it a competition at all. It just feels that at the moment Skriniar feels like more natural captain than Barella. But what needs to be mentioned also is that if Barella gets captain's armband, it can change his approach to the game. Ease down a bit (but not too much!).
E

10 years of FIF
He's a natural leader. Exudes so much energy and passion. Every tackle for him is akin to scoring a goal. You can tell from his body gestures. Impossible to have him as our captain now but I truly wish he would be officially crowned as vice captain like Cordoba.

10 years of FIF
Love that he’s brought the goal scoring back to his game this season.

Yeah that was so bad. Luckily it's 3 yellows before a suspension. They carry over to knockouts and will be wiped out before the semis (we're probably not gonna be there).

uny_arturo said:
He's a natural leader. Exudes so much energy and passion. Every tackle for him is akin to scoring a goal. You can tell from his body gestures. Impossible to have him as our captain now but I truly wish he would be officially crowned as vice captain like Cordoba.
Click to expand...

He's not yet there as a leader (if we're comparing him to Cordoba) but he'd be my first choice.

10 years of FIF
Not the best of games and yet, dominated. Some of his passes were horrible and Sheriff tried to exploit that when he got the ball, pressing on him, but luckily they are shit. He'll have to be few levels better against Milan as far building the attack goes. 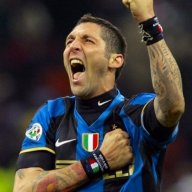 The way he screamed and celebrated the 0-1 tells me this guy breathes and lives Inter.
Last edited: Nov 8, 2021

Materazzi_23 said:
The way he screamed and celebrated the 0-1 tells me this guy is breathes and lives Inter.
Click to expand...

We need more of that, players with passion and love for the club.

The real captain of Inter BUT he is not Italian