They want to put us under pressure that much that they fabricate a story about Allegri wanting Skriniar at Jube.

I just choked on my coffee.

Materazzi_23 said:
They want to put us under pressure that much that they fabricate a story about Allegri wanting Skriniar at Jube.

I just choked on my coffee.
Click to expand...

Marotta responded by leaking to the media Vlahovic is on top of Inzaghi's list and the operation is difficult but not impossible.

The funny thing is Inter players have been linked with Rube by their trash sources from time to time but it's their former poster boy, Dybala, who could make the opposite route.

He is almost out of contract, in winter he is free player. I belive next season is his last in Inter.

Most Improved Member
If they let him for free they can shut the club down.

Forum Supporter
Note to management: work on his contract now, with a decent raise and extension. Moreover, don't blab about either to limit the vultures circling.

According to La Gazzetta dello Sport, Chelsea, Manchester United and Tottenham are interested in Inter defender Milan Skriniar, but the Nerazzurri are confident of extending his contract expiring in 2023.

The Slovakia international has been one of the best defenders in Serie A over the last few seasons, attracting interest from many clubs around Europe. La Gazzetta dello Sport reports Chelsea, United and Tottenham are monitoring the former Sampdoria star, but Skriniar is happy at the club and Inter are already preparing a contract extension offer.
Click to expand...

I thought I've read somewhere that it was 4.5M + add-ons but maybe I've misread it. Most important thing is that we want to keep him for the rest of his career if we tie him until 2027.

TheNetworkZ said:
The first few pages of this thread are hilarious to go back at and read
Click to expand... 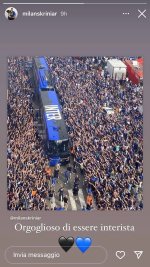 ''Proud to be Interista''

If I were gay I'd get off to him nonstop.

Best Football Poster
Pedulla said Skriniar rejected to leave Inter in January even though Inter and Tottenham had reached an agreement. 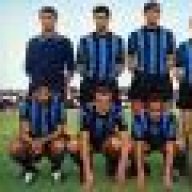 10 years of FIF
Even if would be painful, I would be open to sell Skrniar and bring here Bremer, if the fees make sense. And by that I mean enough money to buy a good midfielder torotate with those 3 we currently have.

Best Football Poster
This guy deserves captaincy just for the shit he has gone through from ownership and management in the last two years. A true Interista.

Il Drago said:
Pedulla said Skriniar rejected to leave Inter in January even though Inter and Tottenham had reached an agreement.
Click to expand...