brakbrak said:
Back to "Best striker in the world"?
Click to expand...

where did I say that

Glass box said:
where did I say that
Click to expand...

Best Football Poster
The problem was never Lukaku sale by itself. Even without financial problems you sell him. The offer was too good to refuse. The problem is he wasn't properly replaced.

Il Drago said:
The problem was never Lukaku sale by itself. Even without financial problems you sell him. The offer was too good to refuse. The problem is he wasn't properly replaced.
Click to expand...

Exactly. Anyone who seen my posts last year knows I loved him here, but he done us a favour by pushing to leave. It would have been completely idiotic to have not sold him at that price

The problem was spending 30m from his sale on correa

Most Improved Member
I assume they are playing against some big PL team. 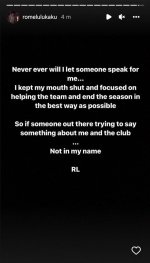 10 years of FIF
Is this a response to the report a number of days ago where Pastorello was quoted as saying that he did not want Lukaku to return to Inter?
T

brehme1989 said:
Both Henry and Bergkamp flopped in Serie A. Nothing the clubs could have done to prevent that. We gave Bergkamp too much room to improve but he was completely out of depth.

Juventus on the other hand didn't give Henry much time but there was too much competition and he wasn't mentally there yet. Took him a while to get settled at Arsenal, too.

Vieira was also a flop at Milan. To complete the Arsenal trio with a floppy Italian big three background.
Click to expand...

Henry was never a CF at Juventus. He was played as winger there. Only at Arsenal Wenger turned him into a CF and the rest is history.

Bergkamp was a bit of a mystery at Inter. Absolutely instrumental in our UEFA Cup triumph, but severly underwhelming in Serie A.

Vieira though was never remarkable in his spells with all big three Italian clubs he played for, us included. For some reason, I always had a soft spot for him. Shame he left mid season in our treble winning campaign. Should have stayed just for the sake of getting a UCL title in his CV.