brehme1989 said:
The last thing we need is Lukaku whining in the locker room.
Click to expand...

Bremer prefered the money and Juve over Inter, he also leaved Torino as captain for the city rivals... While Lukaku prefered Inter over the money.. but still get's insuted. Not to forget that he was one of the reasons why we won the scudetto with Conte. So what? fuck Bremer, viva Lukaku!
at the end i can live with it, if he's the only "top player" we get (as long Skriniar stays)... maybe also getting a rano replacement and thats it.
Last edited: Jul 22, 2022
Q

10 years of FIF
Most Diverse Poster
Lukaku also at first prefered money over Inter, but I guess only the events of one summer are allowed to be mentioned.
A

wera said:
Lukaku also at first prefered money over Inter, but I guess only the events of one summer are allowed to be mentioned.
Click to expand...

Lukaku is just a stupid little kid with a big man's body .

wera said:
Lukaku also at first prefered money over Inter, but I guess only the events of one summer are allowed to be mentioned.
Click to expand...

if we weren't that stupid to spend that money on Correa (or better only 30M of the money), but for someone better, today we would not care that much. We would have won the scudetto + get big rom for free.

Of course that would not change the fact that he leaved for money/chelsea/what ever. But i think he already is forgiven for what he did, he fucked Chelsea only to come here. It's anyway not hes fault if we lost the scudetto, Correa for 30M was just a waste, you could have get a decent striker or alternative for Dzeko.

10 years of FIF
Nostradamus
Lukaku accepted Juventus' offer in 2019 as well, then came two weeks later and started kissing a badge.
I'd wonder why people are still so gullible after so much experience with these things but apparently I wasn't born yesterday

Forum Supporter
10 years of FIF
Rom took the team out to an argentine restaurant. 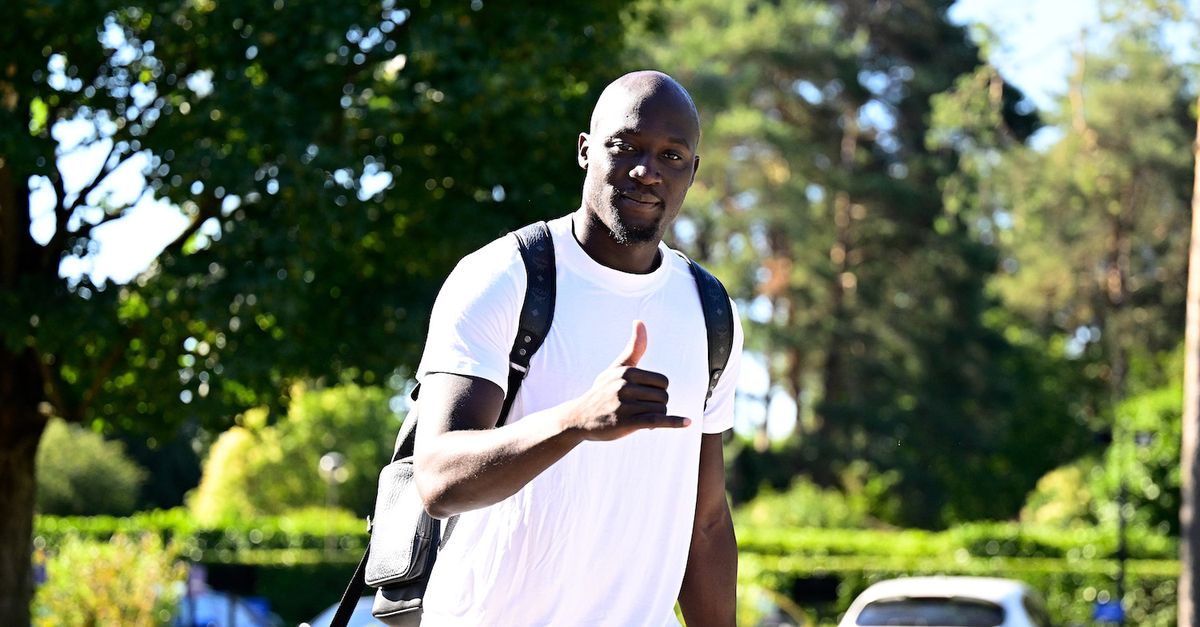 sdvroot said:
Lukaku won't want to come back while Tuchel is there, if he stays there the loan will be extended for another year. Dzeko, Sanchez and DeVrej will go free next season, and we can finally bring back the now matured Vanheusden, Satriano and Esposito instead.
Click to expand...

If even one of those players turn into a good enough player that can play for this club, I’ll gladly take it. But 3? Not a fucking chance.

Choppin Onions said:
If even one of those players turn into a good enough player that can play for this club, I’ll gladly take it. But 3? Not a fucking chance.
Click to expand...

Yeah with youngsters you can't bank on them making it. That's why you need to have many of them trying it so that hopefully at least someone makes it.

That's probably why we've been reluctant to sell our kids outright this summer. First, prices are low so it wouldn't make too much difference and the second point is what I explained above.

CafeCordoba said:
Yeah with youngsters you can't bank on them making it. That's why you need to have many of them trying it so that hopefully at least someone makes it.

That's probably why we've been reluctant to sell our kids outright this summer. First, prices are low so it wouldn't make too much difference and the second point is what I explained above.
Click to expand...

True but there are some cases where i m wondering why we have not sold the young guys like Males, Basel obviously wants to keep him and would have paid for him but we decided to loan him out to them for another year....
Although imho he ll never make it at inter...

Yes very much so....
They like him a lot while not a sure starter dude played in 28 games last season..
He he did come of the bench more often then he started but still. Apperently he s also a real professional unlike esposito or atleast thats the chatter out of basel

10 years of FIF
Daily Mail reports Inter and Chelsea already agreed Lukaku will be loaned for another season next summer. Daily Mail but that sounds completely logical. I just wouldn't commit to the same salary if he doesn't light the Serie A on fire again.

CafeCordoba said:
Daily Mail reports Inter and Chelsea already agreed Lukaku will be loaned for another season next summer. Daily Mail but that sounds completely logical. I just wouldn't commit to the same salary if he doesn't light the Serie A on fire again.
Click to expand...

If he doesn't light the serie a on fire again he better gtfo. Should be at least 20 goal a season penalty included for us to consider extending him

10 years of FIF
I guess 20 goals is fair since he's gonna have at least 5 against total shitters (as meaningless goals). But more important than Lukaku's pure goal numbers is how he fits to our game and gets us to win more games. How he elevates Lautaro ie. if Lautaro can still get 20 goals, it's probably a good thing (given Lukaku is there too scoring next to him)
Q

10 years of FIF
Unless they had it written down and signed, otherwise verbal agreement means very little.

Lukaku can have a bad year and we will send him back. He can also have a great year and Tuchel leaves Chelsea and they will want him back or want to sell him outright to other clubs.

10 years of FIF
Yes and of course it's verbal.

What matters most is player's will. In case he wants to stay at Inter, Inter's will too then.

10 years of FIF
Surprised nobody shared his latest interview with DAZN yet, so here you go FIF:


LUKAKU: ‘I WANTED TO GET REVENGE AT CHELSEA, IT WAS A DIFFICULT SEASON’
Click to expand...

Romelu Lukaku reflected on his difficult year with Chelsea and his intentions to guide Inter to more trophies in the coming years.

The 29-year-old Belgian forward joined the Blues in a deal worth around €115m last summer and he was expected to light up the Premier League under Thomas Tuchel, but things didn’t turn out as planned. After a disappointing year in West London, Lukaku returned to Inter on an €8m loan deal in a bid to re-find his form.

Speaking to DAZN, Lukaku first discussed his and Inter’s goals heading into the new season.
“I don’t care about the Capocannoniere race. I’ll tell you honestly, I only think about the Scudetto. We are at Inter, here we play for the Scudetto, we don’t play for individual things.”

He revealed which Nerazzurri player found out about his return first.
“Lautaro. We spoke on Instagram, I had changed my number. And then on WhatsApp. He was one of the first I talked to, then Dimarco, Bastoni and the others.”

The Belgian striker touched on his inner anger following a difficult year with Chelsea.
“The season at Chelsea gave me extra motivation to do even better than before. I think in one year everyone has forgotten about the things I am capable of doing on the pitch.
“That is a kind of anger that I have inside me. That now the team has it too, which didn’t win last year, all together we hope to do better and bring something home.”

Lukaku spoke about what went wrong after his €115m move to Chelsea.
“So many things. I think before, when I left, I wanted to take revenge at Chelsea because when I was young it was my team for 11 years. I had the opportunity to go back there and thought I would be a hero, but that wasn’t the case.
“In March, when I heard there was an opportunity to come back here, slowly I didn’t say anything, but toward the end of the season we did a very good job with the club and I was able to come back here.
“I make reflections only at the end of the season, so after the last game I put myself to think what my situation was. I saw that as a player with Inter I did well, the season at Chelsea for me was difficult. I had no doubts, that’s why I made the decision to come back here.”

He commented on the work he started doing once he realised he’d be returning to Inter.
“To fit into the team as best I can, Inter plays differently than when I was there. The important thing for me is to fit in well, to understand the coach’s system.
“During the year I had a lot of contact with Inter players, for me it’s like I’m in my second year and I never left.”

The 29-year-old touched on what new things he’s seen at Inter since returning.
“The players have more desire to win, every match is life or death and I like that. We need this. This team is even more united than before.”

He spoke about his striking partner Lautaro Martinez.
“I told him he has to do more! We both told each other that we have to do better than before. If we want to achieve team goals, we all have to do better because the other teams have become stronger.
“I saw right away that his qualities can help me and my qualities can help him. We are not selfish strikers, I know when it is Lautaro’s day and not mine, so I help him and we win and take it home.
“We want to win even the little matches, we are always on opposite teams because we want to be competitive, but we know that even together we can make a difference for the team.”

He spoke about the kind of player he’d have been if he never joined Inter.
“It was destiny to play for Inter, like for Anderlecht and Chelsea. It was what I imagined, Inter and Anderlecht and Everton gave me the opportunity to become the player I am.
“The love of the people and the fans, for me and for my family, I thank them and I still apologise for how I left, but I have to speak on the pitch.”

Finally, Lukaku discussed his mental growth over the last few years.
“When I arrived at Inter I became like this because I came from two difficult years mentally at Manchester United.
“Physically I suffered because I was not there mentally, I have to thank Conte because he made me a strong player, but mentally he really made me grow, he taught me to never give up and to give my best. That will stay with me until the end.”
Click to expand...