10 years of FIF
Forum Supporter
I have a hard time blaming him for today. Even his substitutions were the right moves.

Starting Dimarco over Bastoni left us too vulnerable at the back. Not sure what Bastoni's fitness situation is.
H

If i didnt know he was such an awful tactician, i might have thought he threw the game on purpose to support his milan brother.

But then i remembered how shit he was at decisive moments at Lazio as well.

He had NO answer when his plan isnt working and he can never adapt. Hallmark of a mediocre coach.

Hikonyán said:
Inter were brilliant in the first 30 minutes, then Bologna adapted, yet this joke of coach failed to respond.
Click to expand...

can you explain to us what Bologna did and how their adaptation to Inter's gameplan worked?

Best Football Poster
In terms of coaching i don't have much to complain about. He had very limited options from the bench and he took all the risks he could and it certainly wasn't his fault Radu fucked it up. There's a mentality issue though. Match was offered to us on a silver platter with the early Perisic goal. We should have a ruthless approach and kill the game in first half. Instead we got relaxed, complacent and totally collapsed after conceding out of nowhere. In second half we barely created anything. Terrible approach in the most important match of the season.

We shouldn't miss the forest for the trees though. The real culprit is Suning. In a way we got exactly what we deserved. It would be a football hubris to get rewarded after their policy last summer.

Inzaghi once more completely faltering vs a team who puts a ton of men behind the ball. This guy is horrendous at breaking a defense down. 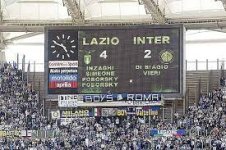 StefanNedelchev said:
today it was not his fault..that fucking lautaro misses 3 clear chances to end the game in the first half. It is not his fault that we have fucking dimarco and Radu as subs
Click to expand...

Agree, but that rule of always substituting a player on a yellow pisses me off so much. It's so rigid, if a meteor was coming to earth, he would stick to it.

Il Drago said:
We shouldn't miss the forest for the trees though. The real culprit is Suning. In a way we got exactly what we deserved. It would be a football hubris to get rewarded after their policy last summer.
Click to expand...

Yep, this sums it up for me. Hopefully that shield of protection that last year scuddetto brought them will slowly start to disappear and pressure starts to mount to sell the club.
E

Forum Supporter
Can't really blame him today. Started Inter's best striker combination of late, Dimarco did great last match and if Bastoni was still with a nagging injury and a yellow away from suspension well it was a reasonable approach. The only one was Radu, but if Handa was unable to perform then there was no choice. Moreover, many of us knew the game was going to be ugly and worrisome with Radu in goal.

The tactics were fine but again missed opportunities cost Inter big time. As for the first goal was De Vrij or Dimarco's fault I really don't know. In the 2nd half Bologna played with confidence and Inter did not. The 2nd goal, well, that falls on the keeper IMO. The players themselves shoulder the responsibility for that 2nd half debacle and they grew tired and frustrated and missed a couple of opportunities as well to level proceedings. The subs were the right ones maybe a little to late, but who knows. Then result was an utter disappointment. It will interesting to see their attitudes through the rest of the season.

As for firing Inzaghi? Just who to you have in mind, especially if the club strategy is to lower salaries and the potential to lose some of the talent Inter has currently. Don't forget the mantra currently is fiancial sustainability The replacements incoming in some cases, unproven, no better or perhaps worse than are on the current starting eleven. These are just a couple great selling points to any potential coach worth their salt. Best stick Inzaghi until this monetary sewer is flushed out.
Last edited: Apr 28, 2022

agree we cannot blame him entirely, his set up was right with men in his hands and started right with a plan in mind but I think 2nd half he couldn't turn it around with some of his weird decisions.

Correa clearly didn't work from first half but he kept him for long in second half.
The team continued crossing to Dumfries in far post for whole match, even he was off and we had Dzeko as option, didn't put the ball into Medel's position to take advantages.
Green light for Dimarco to go high and shoot but took him off and stopped after three tries, why not set up for Hakan as well after that? he's one of our best long shooting.
Sanchez on for Barella (I guess because of yellow) but moved him to the left not middle, we struggled to hold the ball in transition from left to right and right to left.
Skriniar played high and replaced Barella to initialise our attack from right wing but many times he didn't know where to pass and couldn't shoot from outside.

All of them together with pressure and Bologna played low, compact, we didn't break them, got into counter attack trouble.
Last edited: Apr 28, 2022

10 years of FIF
Hard to blame him, but the team totally lost shape when he subbed on sanchez and dzeko. Looked like lautaro moved to the right, dzeko middle and sanchez left. That was a stupid move to make, should have just been sanchez in the 10 role.

Other than that, not much else he could do. Team lost its head. Again.

10 years of FIF
Can't blame him today but don't forget we are in this position because he was unable to fix the February dip in form. We really should have run away with the scudetto during the second half of the season.

But it all does come down to our owners at the end of the day.

varmin said:
I can't wait to see this thread in the moment we lose the Coppa final and the scudetto

Too many jinxer in this forum

but Inzaghi played some part on this Bologna lost. Stop playing from behind in late 20 minutes. Wasting time and only bring threat for opponent to score.
Last edited: Apr 28, 2022

10 years of FIF
Most Diverse Poster
The plan for the first half was working, just the execution wasn't there. It should've been 0-3 for us at halftime, but it wasn't, so fuck it. On to the next game.

Also can't blame him for a shit bench.

Forum Supporter
10 years of FIF
Without bastoni, Vidal and goosens we lack options from the bench.
Don't think he got tactics wrong.
Our finishing was poor, de vrij didn't do his job and then radu screwed us.

Im far from blame him for the lose, but this guy need to see that dimarco cant play as CB, dimarco was very good at attacking, but still this guys cant be count on at defending, the first goal is on him and our dutch moron, simone should have put dda ther or even frogy..

10 years of FIF
Forum Supporter
Most Passionate Member
Think most of you should remember 4th place was the best you were expecting.

Tamirk said:
Im far from blame him for the lose, but this guy need to see that dimarco cant play as CB, dimarco was very good at attacking, but still this guys cant be count on at defending, the first goal is on him and our dutch moron, simone should have put dda ther or even frogy..
Click to expand...

His defending his fine for a squad player. He can't be blamed for being beaten in the air by a much taller guy . He can't beat Arnautovic in the air it's physically impossible unless Arnautovic doesn't jump.
The blame is on de vrij for not realizing this and leaving his teammate in the lurch.

10 years of FIF
And we can't blame Inzaghi for playing Dimarco. Bastoni was out because of his fitness level. And despite the goal conceded, Dimarco played actually pretty good game, created some offense with his movement and dribbling.

Stefan said:
His defending his fine for a squad player. He can't be blamed for being beaten in the air by a much taller guy . He can't beat Arnautovic in the air it's physically impossible unless Arnautovic doesn't jump.
The blame is on de vrij for not realizing this and leaving his teammate in the lurch.
Click to expand...

I disagree. De vrij was covering the space soriano could have easily ran into had de vrij left it.
I think inzaghi should have had a plan for this because its obvious arnautovic will try to get on to di Marco.

Di Marco played well but when there is a tall strong striker like arnautovic, maybe inzaghi should have started with d'ambrosio.