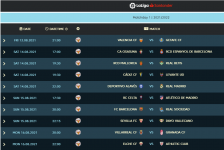 10 years of FIF
For Barca, a lot to look forward to in terms of young talents and new acquisitions

Memphis, despite his Neymar-ish persona, looks like he will be an excellent addition to the attack. Even without Messi, Kun or Ansu, already shows terrific understanding/link with Griezmann

Yusuf Demir has been a genuine revelation, acquired on loan from Rapid Wien (10M purchase option) for the B team - inverted winger or attacking midfielder: effectively a #10 like Messi. Terrific pressing and very high football IQ, only 18 y.o. Seems pretty clear he will be a part of the 1st team which unfortunately means Collado will have to be loaned out (Now rumoured to be heading to Club Brugge KV in Belgium on a one year loan)

16 y.o. Gavi stealing headlines from Puig - remarkable composure & ability to play as an interior midfielder, between the lines. Not sure I have ever seen a 16 year old looking this comfortable in the 1st team setup running the offense. He will be registered with the B team (Really a Juvenil A player) but will be seeing time with the 1st team

Same goes for 19 y.o. DM, Nico - I am still in a bit of disbelief over how good he looks with an understanding of the position that explains the Busquets comparisons

Alejandro Balde will be the heir apparent to Alba despite not getting any minutes on Saturday and will also get minutes with the 1st team this season while also sharing duty with the B team. For me, he is absolutely ready

Puig, despite clear agenda by Koeman, continues to impress but will the Dutchman favor Gavi over him? I think they can compliment eachother well

Messi, Kun, Pedri, Garcia & Emerson yet to feature in pre-season. Moriba's contract situation is at an impasse and my hope is that he is sold before season begins with Chelsea & City apparently lying in wait

Still players to move out (Coutinho, Lenglet, Pjanic, Neto, Umtiti & Braithwaite) before Messi can be signed since it appears Griezmann will be staying and accepting a reduction in wages. Dembele is believed to extend as well. Next 10 days will be key as movements are finally expected to take place

Financial problems still to resolve ahead of season but talent is quite strong. Coaching? Less convinced wrt Koeman obviously, we wait for Xavi

Best Forum Newcomer
Forgot to make a thread for the 2020/21 season?

Best Football Poster
Not that anyone is surprised but La Liga are rescuing Barca from the mess they put themselves in.

Mundo Deportivo: The agreement between LaLiga and CVC investment, with which the bosses will immediately inject the competition and the clubs with the 2.7 billion, will allow Barcelona to register Leo Messi and the rest of the signings in the competition almost instantly.

Forum Supporter
For those in the US, who don't know already ESPN and ABC and their networks will be carrying the matches.

I honestly thought he was bullshiting with his contract extension to get more money...
So where does he go now? Psg, man city, maybe even chelsea, Abramovich is just mad enough to do it...

10 years of FIF
Might be also possibly a power play by Laporta. He has been against Tebas regarding Superleague too and this Messi contract registration is tied to that too. Tebas thought he can make Laporta to drop the Superleague if he allows Messi registration but Laporta wants it all.

Now Laporta made his move. Tebas will feel the heat as he's going to lose the biggest football start of the world from his league.

10 years of FIF
Most Diverse Poster
If we keep Lukaku because Chelsea get Messi, I'll be pissed off... to certain extent.

Best Football Poster
I can only see Messi going to PSG or MLS. Nowhere else.

Il Drago said:
I can only see Messi going to PSG or MLS. Nowhere else.
Click to expand...

Can't imagine for the life of me that Messi would accept MLS retirement yet.
E

Forum Supporter
Wonder if he and Pep could work something out.

Just because they have Inter … Miami there, right foot has to be the same as left foot, you know