Alternatives won't be cheap though. Decent CBs are pricey for us, while the free ones would probably require the same wages as De Vrij, and we don't know if they're good enough.

If he regains his form and keeps it consistent, he'll easily play at high level for at least 3-4 years.

Best Football Poster
If he's willing to accept a salary at around 3m i would keep him. But certainly not at over 4m he's earning now.

10 years of FIF
Most Diverse Poster
I'd give him a slightly lower salary for 2+1 years. And hopefully he keeps his form, he has been a monster ever since he marked Lewa out of the first Barca game

Il Drago said:
If he's willing to accept a salary at around 3m i would keep him. But certainly not at over 4m he's earning now.
Click to expand...

10 years of FIF
I don't see teams who will pay him more where he a start and they are actually competitive. He can go to the EPL but he isn't ever making Champions league or Europa League. Where else could he go? Would a German team outside of Bayern pay him what he wants and actually play him.

Forum Supporter
10 years of FIF
We got some good seasons out of De Vrij but it’s safe to say, he won’t be renewed. Games like todays are certainly not helping his value for whoever he signs with next.

10 years of FIF
He's declined rapidly over the last couple of seasons. Even before of this well-known collective issue we are having these days, he was arguably the weakest point in our team.

We lost too many points because of him and Handanovic over the last couple of seasons, especially in some of critical matches. Credit to him for his contributions since he joined, but he isn't good enough anymore. There needs to be major changes in our starting line-up for the next season, and de Vrij is part of the changes of course.

10 years of FIF
Yeah, unfortunately he's just past it now, decline is immense given 3 years ago he was best defender of Serie A and two years ago he was the leader of the Scudetto winning defence line. Wouldn't offer him new deal with his current salary, maybe lower.

Best Football Poster
From a footballing perspective, we need to move on from De Vrij, move Skriniar to the middle and get a fast ball playing rcb.

But can we really afford a replacement?

10 years of FIF
Acerbi it is then.

(no, I don't like him, he's even clumsier and slower than De Vrij)
N

I don't think we need a ball playing RCB, I think the LCB was meant to be the attacking side and the RCB is more focusing on the defence and can cover 2 zone when the RWB goes forward, I think we just need to look for a fast and physically strong RCB.
C

Think he has been losing form more each season. Not quite prepared to write him off now though.

Show me some cash and he's gone.

10 years of FIF
What we need is someone faster who can allow the defense to be higher up in the pitch. I would love a cordoba type of player who can cover the space and be able to chase through balls.

The ball playing part i wouldn't care so much ... 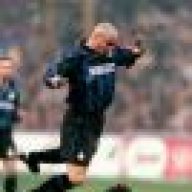 I wish he's staying, we don't have much money to buy players, he's still a good player for us, maybe a bit off form but who doesn't.

10 years of FIF
I would have liked lowered pay.

This would mean he would stay as our starter. So far it only looks his decline is here to stay and it wasn't just a one-season downturn.

10 years of FIF
At least we`re not offering him a 4 year deal. Let`s see how much he wants to stay (I believe so).

EDIT: De Vrij is asking for a 3 years deal, while Inter are offering 2.

“The more intense the competition, the more your level rises. Otherwise you become relaxed.” - Ivan Ramiro
“Stefan de Vrij is an example of this happening” Cordoba continued, “he’s a great player, perhaps if he’d felt someone closer to him ready to take his place then his level wouldn’t have dropped.” - @CafeCordoba
Click to expand...