10 years of FIF
Nostradamus
That's pathetic. Is that official? Come on....

GK: Courtois. Hands down.
DR: I'd say Vrsaljko.
DC: Varane is a correct choice.
DC: I'd argue that Miranda is worth a shout. There's also Umtitti and I'd argue that Vida was more significant than Lovren for Croatia.
DL: There has been a severe lack of left backs in the tournament. I'd say Augustinsson of Sweden was the best one.
MC: Paul Pogba. Come on FIFA. For real?
MC: Luka Modric is the correct answer here.
AMR: Mbappe.. correct player, just wrong position
AMC: Eden Hazard. Also correct choice. Arguably de Bruyne could be picked but he was overshadowed by Hazard imo.
AML: Ivan Perisic, please. Cristiano Ronaldo would have more merit than Neymar here. Golovin is probably #2, or we could have had Hazard as the left winger and de Bruyne as the #10.
FW: Antoine Griezmann. Evident lack of strikers in the tournament, but Griezmann is the best choice. Mandzukic also deserves a shout to be honest.

Griezman being consistent goal + assist most of thr competition
Perisic nuff said
Coutinho drag mediocre brazil ass
Mbappe nuff said
Modric been burn out on later competition but still he is crucial
De bruyne contribution is essential to balance belgium midfeld
Laxalt no one impresive
Mina colombia basically he and james shout out to crzd as his main sponsor since the beginning
Godin he is class, other choice is miranda
Pavard his goal ***** only struggling on the final
Curtois the only gk who didnt get karius'ed 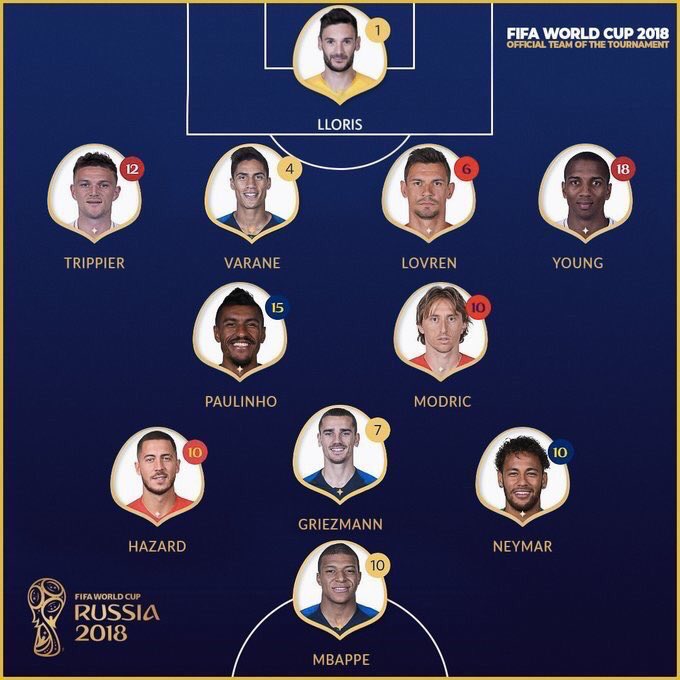 Would be my pick
J

Forum Supporter
10 years of FIF
That FIFA 11 is wrong and from fake account. So many got trolled.

Forum Supporter
10 years of FIF
Anti-Barca
How is Hazard rated higher than KDB? Unbelievable. I guess some nice dribbling gets you overrated easily, just like with Messi.

Yeah Hazards dribbling looked nice, but when it came down to it he was a huge let down. He only got a few assists and a goal or two (one of which was a penalty) against their shit tier group stage opponents and #61 Japan.
Next to that, against the real teams like Brazil and France he's invisible. Except for his dribbling, of course

Always dribbling for way too long, running into some wall causing possession loss, or if he didn't, trying to shoot by himself and missing when he should have crossed to make it a 100% chance on multiple occasions. He ruined like 10+ chances against France alone by dribbling too long & refusing to pass/trying to go for own success. The latter reminds me of Robben in his younger years. And now people call this the player of the tournament just because his dribbling looked amusing. Despite failing to perform against the big teams, this has caused him to get arrogant enough to claim RM should just buy him because he's the best player in the world…

I mean, KDB was largely invisible as well but at least he delivered against Brazil.

Neither of these two got anything on the real Belgian MVP though: Thomas Meunier. That guy excelled in every game, working like a horse doing the job of three men alone, and as soon as he was suspended Belgium got raped. He was their true engine, doing so much more than KDB and Hazard combined. But of course you're not hearing a fucking word about this guy because the KDB and Hazard are the names we're used to overhype. Poor Thomas! Sigh.

At least Courtois is rightfully the best GK. He did a Karius or two against Japan, but that wasn't anywhere near as bad as other GK's this WC.

10 years of FIF
Because KdB is a "nice" player, like Ozil. They need other good players around them and they can knit things together. But they're not studs who can be relied on to lead a team almost solo. I'm not the biggest Hazard fan but that's the reality.

Good riddance for them. Now Gundogan should follow suit - the other guy on that Erdogan propaganda photo.

Wobblz said:
Good riddance for them. Now Gundogan should follow suit - the other guy on that Erdogan propaganda photo.
Click to expand...

Uli Hoeness is a savage.

I am glad that this scare is now over. He had been playing sh*t for years," he told Sport Bild .

"He last won a tackle before the 2014 World Cup. And now he and his sh*tty performance hide beyond this picture.

"Whenever [Bayern] played against Arsenal, we played over him because we knew that was their weak point.

"His 35 million follower boys - that don't exist in real world - are convinced he has played sublimely when he completes a cross pass.

"The development in our country is a catastrophe. You have to go back to what it is: sport. And from a sporting point of view, Ozil has no place in the national team for years."
Click to expand...

Wobblz said:
Uli Hoeness is a savage.
Click to expand...

Hoeneß is a douche. If he had a little bit of honour left, he would be the first to retire. Well, he shouldn't have made his comeback first and foremost.

To Özil: Also in his three famous post he showed no self criticism at all but in some aspects he's right. Players and former players are measured with two standards. DFB honour captain Matthäus appears on pictures with Putin and Zanetti acts like best buddy of scum like Infantino.

Well, ozil has been playing very bad in the national team. So when we look at the footballing aspects, which should be the only ones to count here, it only makes sense that he isn't called up anymore anyway, regardless of his decisions
Last edited: Jul 24, 2018

firmino said:
Well, ozil has been playing very bad in the national team. So when we look at the footballing aspects, which should be the only ones to count here, it only makes sense that he isn't called up anymore anyway, regardless of his decisions
Click to expand...

I think that's not true. Hoeneß f. e. said he hasn't won any duel since 2014 ... At the World Cup he won 60%+ as an offensive midfielder. He also made most key passes per game in the World Cup by far, had the most assists in the German team since ten years by far (goals and assists only Müller has as many), had the most assists of any player in the world in World Cups and Euros since 2010 and so on.

And IIRC when Germany was beaten by Mexico 0:1 he was the only one running back, trying to stop the Mexican player.

10 years of FIF
Forum Supporter
I think his demise is overstated. Ozil is very good, but he's also a very particular player. He's not versatile, and he can't play in a wide variety of roles. In a sense, he's only as good as the players around him.

Ozil is the type of player Argentina's national team is desperate for; unselfish, pass first, and willing to let others take the glory. However, when you surround that type of player with Mario Gomez, Timo Werner (who I like, but was terrible), and Mueller (worst German player all tournament imo), you end up with a whole lot of nothing. Compound this with the fact that Khedira looked finished.

If Ozil was put as our #10 behind Icardi and with Nainggolan/Brozovic behind him, the results would be crazy good. Curious to see what Emery does with him though. Wegner played him a lot as a RF/RW last year, which is pure silliness.