brehme1989 said:
I was zapping and I saw some EMP-DOR game then realized it was kids and Dortmund had equalized 2-2 at the 40th minute. Apparently it's Empoli vs Dortmund.

Lost a lot of episodes if Empoli is one of the big boys
Click to expand... 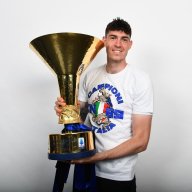 Do we have some promising youth players at our Primavera atm? With our current financial state it's a shame we don't develop youth for our first team. Zaniolo was something special and i think Esposito can turn into something too. Had also high hopes for Vanheusden but sadly the injuries ruined his future with us.

Sadly the Italian youth system isn't build to develop youth players. They focus too much on systems and winning titles instead of focussing on your most promising youth players and develop them further. At senior level it's even worse. Young players just don't get a change here. It's time Inter get's a B-team playing in Serie-B or Serie-C. The step from youth too Serie-A is way too big and loaning your players to other Italian teams won't work sadly. Just look at Ajax, PSV and Barcelona. B-teams can do wonders.

10 years of FIF
Forum Supporter
Most Passionate Member
We have some good players but none in the Primavera that are first team worthy that are still here at our club now and not on loan.

I don't see to many talents in our Primavera team right now. The most interesting players are Cesare Casadei and Mattia Zanotti.
But we have many players which are on loans.
Monza is willing to buy Michele Di Gregorio, our goalkeeper.
Sebastiano Esposito, Samuele Mulattieri, Martin Satriano, Andrea Pinamonti, Darian Males, Facundo Colidio and Eddy Salcedo are the strikers we own. I think we can gain a lot of money from selling some of them, but I wouldn't risking losing Esposito and Satriano, they could improve a lot and become our first team players.
Zinho Vanheusden is doing well in Genoa, but he is struggling with injuries. I don't think he is for sale, because his value is inflated so we can't sell him too cheaply.
Lucien Agoume is doing great in Brest, he should go for another loan in my opinion. He could be useful vice-Brozo, but it would stop his development, because Brozo is playing in almost every match.
Lorenzo Pirola was described as great prospect in the past, but he is struggling with injuries and skipped a lot of matches in Monza.

And there are also Filip Stankovic and Geatano Oristanio who are playing for Volendam. A team which is managed by Wim Jonk and they are leaders of second tier in Netherlands. They are key players of the team.

So generally, I think half of them will be sold to gain money. I just hope we won't repeat Zaniolo scenario.

Our former Primavera player Wilfried Gnonto is apperently wanted by PSV. VI and Eindhovens Dagblad are reporting that (quite reliable source). Zürich want 5 million for him. He's just 18 years old and played 33 matches for Zurich this season. scoring 10 times and providing 5 assits. Good numbers as he was a substitute quite a lot.

Why did we sell him? I've never seen him before, but he has been highly rated in FM for the last 3 editions.

Abu Bader said:
Why did we sell him? I've never seen him before, but he has been highly rated in FM for the last 3 editions.
Click to expand...

He left on a free. Huge fuckup.

How come we dont have an U23 in serie C

Abu Bader said:
Why did we sell him? I've never seen him before, but he has been highly rated in FM for the last 3 editions.
Click to expand...

Nerazzurri_Ninja said:
How come we dont have an U23 in serie C
Click to expand...

The cost and lack of quality - look at the Juve team, theyre shit. You're better off loaning people out to develop in B than playing C.

10 years of FIF
Nostradamus
It's also useless. What's the experience to gain by losing to a bunch of Lombardian, Ligurian and Piedmontese villages? It's far better to simply train with the first team.

I disagree. Even if the level of Lega Pro is shit at least our primavera players will get tested against grown men which will help them physically. Also there's the possibility of getting promoted to Serie B which is on a much higher level than the Primavera.

Forum Supporter
10 years of FIF
But that's the point of loaning them out. A U23 team doesn't replace a primavera, it replaces development loans for 18/19/20/21

I get that .h., but the major difference with U23 is that you'll actually controlling their playtime and ensure your talents get adequate playing time. This isn't happening with alot of our out on loan players.

You assess your players, those who you believe they are ready to be loaned to a higher level, you loan them out. The ones you think they are at lega pro level and higher level than primavera you keep for your u23 and give them adequate time.

The other benefit comes when you reach serie b, you could use the u23 as a stepping stone to get players ready to serie a level and maybe even inter.

I just don't see any downside to it at all. It shouldn't cost a club like Inter a lot of money to be able to run u23 team made of your Primavera players like Carboni, Casadei etc.

That side would never reach Serie B. Juve are mid table in Serie C. That team would perform to the lowest common denominator - the Serie B capable players would be wasted, and all ykure doing is developing C level players. Basically none of our first team ever played at such a low level, if that's the best our guys can do we should probably get rid of them anyway.

There's a reason why only one Italian club has created an U23 side, and it's not exactly helped them produce any first team talents.

It's not just about player costs, you need to have a training ground, a stadium appropriate to the league entry requirements, etc. I think the speculation was that it was 5-10m a year kn extra costs maybe.

I'd rather loan our best players to the highest level they can play at than artificially deflate their experiences.

10 years of FIF
FIF Special Ones
The only way it makes sense is if you are using it to develop your few special talents by letting them play in that competition against grown men when they’re 16-18. Guys like Valentin Carboni could be playing there as the level is still higher than Primavera.

Basically the mentality has to shift from winning to purely developing players. Primavera would then be the “average” 18-19 year olds and maybe a few gifted 16-17 year olds that aren’t physically ready for adult football.

In reality though h. is mostly right. If we are trying to develop 19+ year old players there then they probably aren’t ever going to make it to Inter. They would be trading pieces for other prospects at best. Even with the preferred model of shoving younger kids into that team the majority of the squad is still going to be average 20-23 year olds.

Best Football Poster
Despite having a b team, Juventus loan many of their youngsters to Serie B teams. This should tell you everything you need to know about the success of the project.

10 years of FIF
Yeah the B team would need to be at Serie B to have any relevance for player development. Like Barcelona B.

Anyway, loaning players to outside Italy is probably our best bet developing the kids. Hardly anyone has really blossomed inside Italy (Serie B, let alone Serie A).

Some players that played for Juve B who play at Serie A level now:

Maybe none of them is of quality to play at a club that aspires to be at a top, but they're not Serie C level players also.

It's like what thatdude said, Serie C is still higher level than Primavera. Having some of your players actually play at that level and get real match experience as you can't get that at Primavera level don't harm your development.

No one is saying don't loan our players out. But for those who are not ready to be loaned, or those we did loan and they sitting on benches with other teams, this can be a solution.

I don't see any harm at all. Juve had/have players they highly rate like Fagioli and Soule played/playing in Serie C.