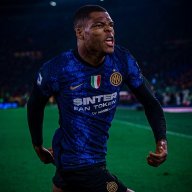 I realize this type of topic can be heavily flame inducing, but it's part of the Forums .

I'm wondering how you rate our player's performances up until now relative to one another. Below you will find mine. Players I wasn't sure about or that we just haven't seen enough, I left out. I want to point out that this is based on performanceand not necessarily on the quality of the player.

I used following template and edited it to my liking, as I like having more tiers to avoid as much as possible having to put 2 people in the same rank of which one is clearly that much better than the other: https://tiermaker.com/categories/sports/fc-internazionale-milano---21-22-season--1228553 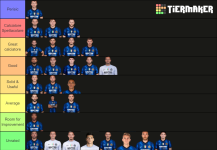 Ranocchia, Vidal, and Sanchez are the backup we need.
Dimarco and D'ambrosio are maybe.
Vecino, Gagliardini, and Sensi are not needed.

Perisic, Brozovic, Barella, and Skriniar are our best player so far.
Darmian and Bastoni are solid.

Handanovic, Dzeko and Hakan are somtimes superb, sometimes so so.
Correa and Lautaro are always so so.

FairyTailed said:
I definitely need @brehme1989's and @Sawyer's take if they have the time
Click to expand... 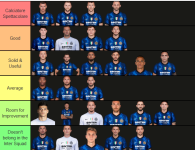 I'll edit this in a few hour and reply after MN Vikes game brother, with explanations.
Last edited: Nov 28, 2021

No way Rano is better then Hakan, he should be at least "solid and useful" too. And if he keeps playing like now then he can be "Good". De Vrij is also really underated here, for me he's one of the best.

10 years of FIF
Calhanoglu has been our best midfielder with Brozovic for the past 5 matches. Better than Barella.

Here is my ranking

CafeCordoba said:
Calhanoglu has been our best midfielder with Brozovic for the past 5 matches. Better than Barella.
Click to expand...

Yes, but that's 5 out of 19 matchdays. I find that Calhanoglu has also had many stinkers. Over the last 5 matches he surely deserves to be in the "Calciatore Spettacolare".

I personally added a couple of extra tiers to try and make it easier for me to split the players depending on their performance level, but as you can see Barella, Brozovic and Skriniar are still in the same tier. However, if you'd ask me to make a ranking of the top 4 players in my post, I'd put:

I'm overselling Perisic, but I agree Brozovic has been better for us than Barella. The latter one has more iron in him than what he has shown. But we still can't play on the field without him - as is the case with Brozovic.


magnesium said:
Dimarco and D'ambrosio are maybe.
Vecino, Gagliardini, and Sensi are not needed.
Click to expand...

Dimarco is kind of a must to keep right now. He's our only real LWB substitute (better than Kolarov), and he can also slot in for Bastoni at LCB (better than Kolarov). Also has some great free kick and corner taking. He still needs some improvement or he would never be more than a squad player, but I find him useful right now.

I'm more reluctant to shop off Vecino, Gagliardini and Sensi. Unless we can get a new back-up in for each player we load off. Sensi is probably least similar to Vidal as a sub, so I'd keep him and sell the others first. But... injuries. And at this point Gags is an Inter Legend .


ElDuccio said:
No way Rano is better then Hakan, he should be at least "solid and useful" too. And if he keeps playing like now then he can be "Good". De Vrij is also really underated here, for me he's one of the best.
Click to expand...

Perhaps Rano hasn't played enough to justify a ranking. But in the games he has played, I don't think he has just "slotted in well as a replacement", as we usually see from him. I think more than once, he's covered himself and the team and I'm very impressed with his performances. Because in the games with Ranocchia it felt like we weren't even missing De Vrij, I decided to put them at the same level. And don't get me wrong: De Vrij is better than Ranocchia and will be better over a full season. All in all, probably too optimistic by me. But everybody needs their odd one out pick.

To everyone: thanks for joining in! Really cool to see your team performance rankings.

Maybe one more question from my side: @ADRossi I'm also less impressed with Bastoni this season. Skriniar has overtaken De Vrij's pole position for me, and Bastoni has stayed in third for our starting defenders. How come you rate him on about the same performance level as Dambrosio, Gagliardini and Sanchez?

Sawyer said:
I'll edit this in a few hour and reply after MN Vikes game brother, with explanations.
Click to expand...

Putting Eriksen in room for improvement is kinda of dark, hahaha - but it's probably the only place where you could put him without saying he doesn't belong in the squad
E

Forum Supporter
I'd put Dzeko up in the highest tier, granted he has suffered of late but overall he's saved our bacon more than once. Frog has been good, but I'm biased

Sawyer said:
View attachment 6065
I'll edit this in a few hour and reply after MN Vikes game brother, with explanations.
Click to expand...

Now first of all, this is performance related, for the season so far, not just the last game or 2 that might be stuck in some peoples heads...

Skrin/Perisic/Brozo self explanatory. Dzeko imo has to be up there too, he's been fantastic. I know he has missed a few key chances but he has made supporters like myself not miss Lukaku as much as I thought I would, his off the ball is unreal, his hold up play is great, I feel he has to be top tier.

Barella was close to top tier however I feel he is inconsistent at times and misses a lot of chances, I don't criticize him at all but I just feel I had to go in the good column, along with Bastoni who is imo the best young Italian defender in the world right now. Darmian and Handanovic finish up the "good" column as although the criticism our captain got at the start of season he totally turned it around for the non believers and is pulling of great saves and he has been solid, Darmian has suprised me so much, what he does up and down the right win, at his age and with the lack technical ability astonishes me, I am very impressed with him.

Super subs for useful Sanchez/Vidal/Dimarco the latter sometimes starting, he's been solid and useful to me. SDV I feel he has lacked all season, he hasn't been the same player we are used to don't get me wrong this is performance related and he would always make my first 11 no questions but like I say he just hasn't been his usual self in defence, never see him make them daunting runs anymore either. Frog played 2 games, solid and useful in those 2 games, no? Thats what he is here for, how can he not go in that list? Toro has nearly went in average for me due to his constant rolling on floor and my lack of faith when I see him dribbling at any defender but he has scored some great goals, he does need to improve though.

Dumfries was lucky to make average and its because I feel he needs more chances, he's been clumsy to say the least.. I still feel he will improve and be vital in our run up to scudetto 20. DDA well, he's just average these days but he will always be fondly remembered by me when he eventually leaves. Hakan, controversial pick? No, not at all, people forget post Genoa goal he disapeared and played awful, the only reason and lets be honest everyone is now sucking him off is because he scored past Milan. He has be good last few games for sure but this is season so far, no since Milan penalty.

Brazao was a tough call, hes injured and was never getting game time but he is for sure one for the future, Correa is self explanatory scores a brace every 100 games everyone loses their shit then he does nothing and is practically invisible, Radu solid back up, Eriksen belongs in our squad and I love him so much I did not know where to put him so this pick is basically a void no matter, Gags has age on his side but he needs to improve, I don't mind him as a squad player but I am nervous when he comes on the pitch and feel we could concede at any moment. Satriano nearly went into doesn't belong but he's young, should have been loaned out but he is getting valuable experience with our first team, he has played some minutes and his first game he looked like a bull in a china shop, he showed his inexperience (can't remember game sorry).

Kola Cordaz Collidio just should leave/retire.. Sensi is made of glass and it shows in his performances, he hasn't done anything to convince me he belongs I have lost all hype around him, wish I hadn't but there ya go. Vecino had a decent game and half maybe this season but apart from that been his usual lost puppy awful self, he made this list for his performance but also his age compared to Gagliardini. 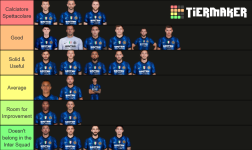