CafeCordoba said:
I agree. If someone is willing to pay like 25m, maybe 20m+5m bonus, I'd sell him immediately. Correa feels like Lazio-or-bit-above level of a player.

Let's see if he can bring something to the table in these final four matches of the season.

I agree. Him as a player in big clubs, kinda reminds me of Guti at Real, and J.Cruz here.
It is weird, like there is something missing, but it is also a pity not to play them.

I would actually place Hakan in that bucket before this season, but his intensity and work rate changed that, which makes me think that he is able to fight for a starting position even at other big clubs.

I still cannot decide his low defensive work rate (improved a bit today) is due to "he thinks he is special" or he is just timid.

Lautaro's first goal, he dragged the 2 defenders back and hence the space: 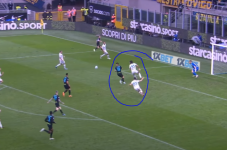 even for his second goal, Lautaro gets space with him: 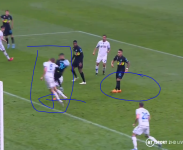 Another one just to show he creates attacking space, dragging 2 defenders out of position: 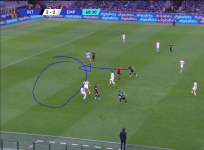 And finally look at what Dzeko (circled one) would make it look like, and normally Lautaro would be where Correa is: 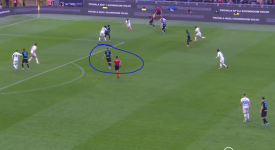 10 years of FIF
Nostradamus
Exactly. People put too much attention on the goal+assist thing for some reason. No idea where this fantasy football video game fusion mentality took over, it wasn't like this 10 years ago.

He still has a lot of room for improvement and he's probably not gonna get there ever, but he's a useful player.

Most Improved Member
Guti? Cmon bro, that dude is Real M legend,was great player, even Julio Cruz for Inter, dont compare them to friggin Correa, compare him with Zarate thats how it goes right now.

Forum Supporter
Correa is absolutely mediocre player with some flashes here and there. He wasn't starter even in Lazio. I rate your efforts to prove that he was useful and involved in that particular game, but when you are in team like Inter, creating space and dragging the defenders is quite insufficient. Especially if one adds his wage and transfer fee.

He's not comparable to them in any way. Hasn't contributed even close enough for us.

brehme1989 said:
Exactly. People put too much attention on the goal+assist thing for some reason. No idea where this fantasy football video game fusion mentality took over, it wasn't like this 10 years ago.

He still has a lot of room for improvement and he's probably not gonna get there ever, but he's a useful player.
Click to expand...

Sure. Ability/IQ to create space for your team mates is crucial attribute for a top forward.

However Correa was bought with 30m€ price tag so obviously more is required ie. those goals + assists.

10 years of FIF
Like I said previously does a great dribble but decision making is shit.

CafeCordoba said:
Sure. Ability/IQ to create space for your team mates is crucial attribute for a top forward.

However Correa was bought with 30m€ price tag so obviously more is required ie. those goals + assists.
Click to expand...

I think the deal was 5 loan + 20 obligation. There are 5m in bonuses, surely, but if we sell him in the summer it's just a 25m transfer that's 20m on the books until 2025 (annual amortization at 6.7m). The bonuses probably trigger only when he's a full player but even so, he wasn't' really brought in as a starting striker but as a filler for the attack to provide things we did not have, like taking on players with the ball. He wasn't brought to pile up goals and assists but it'd be great if he also helped in that department.

The main issue is that he got injured and lost crucial moments in the season which cost us. If he was around with Liverpool - plus Barella of course - we'd probably be in the tournament's QFs (and of course we'd draw anyone but Benfica) and the season wouldn't look so grim now after that February-March period.

He looks passive at times and it's a bad image, but he's a the type of player that needs the ball at his feet, or played around his area of operation. This is also the first time he plays for a contender. Even at Argentina he hardly competed for much playing for a team that struggled to reach top 10. At 27, that hits differently. Others are ingrained in championship contention from their 15th birthday.

Julio Cruz who was a counter example (not a great one but I get the idea) was playing in Europe regularly before Bologna, won the Argentina league with River Plate (both Apertura and Clausura) in the season he played there, won the league with Feyenoord in his 2nd season there iirc and he was never a standout scorer in Italy apart from that one season with us.

This is an issue European football has nowadays, and to an extent its players. That's why they're soft. They all jump to the big leagues from the get go, have stupid experiences with no pressure most of the time that don't really help with their personal growth which makes them complacent and they lack the grit that you gather from being in a championship contention side, whether that's in Belgium, Portugal, Denmark, Greece, Poland or Serbia.

Especially players from Argentina where you have several big clubs that have this type of players, in terms of mentality, you tend to have players like Ricky Alvarez, Correa, Pastore etc that do not have this extra will to win because they're not part of a winning culture. The one advantage of Argentina is that it has a lot of derbies and big games. A lot... So players from a handful of those clubs are very likely to be exposed to do or die games several times a season. Estudiantes of Correa didn't really have that. There's Gimnasia but meh... Don't even know if they were in Primera during his time there.

Brazilians are also a bit similar, where there's a ton of big teams but not very dominant ones historically. Just teams that have winning or contention cycles (like now that's Palmeiras and Flamengo I guess but in 10 years it could be Vasco and Cruzeiro), but at least they also have their State championships that matter quite a lot to them, so even if you're overall in a bad shape, you still have a title contention spirit during a season.

These are the players that you need to catch early on and nurture in a contention environment. Someone like Dybala for example.


It's also why players from top teams of Portugal and the Netherlands are hyped. Their championship exposure is part of the deal. Having high pressure championship make or break games builds character. And Joaquin Correa does not have that. This is why I want Satriano to get loaned to a team like PSV/Feyenoord or Club Brugge/Anderlecht rather than teams like Brest or Cagliari. You want to breed players that can play under pressure and win games that matter, not just "get playing time". That's the worst thing you can do to a player's development after they're 20.

Somehow you put in words the feeling I have when I watch Correa. He doesn't have that something, that mentality, will power, to completely succeed in an environment like Inter.

The deal was 5m€ loan + 25m€ obligation which was activated. Then 1m€ bonus added, don't remember what was the the clause, maybe CL qualification.

He isn't a hitman but then again none of our strikers are. Much like Alexis, Correa has something that other forwards don't have. Maybe I'm just a sucker for players who actually have the balls to take on their marker, maybe I'm just in a forgiving mood since we managed to win but crying over spilt milk makes no sense now. We paid what we paid for him, might as well find some use. If Correa isn't sold and manages to stay fit, I believe Inzaghi can improve him next season. Ideally he will remain a backup if we sign a better striker but he should still start over Dzeko, and over Alexis for that matter. Alexis is a proven super-sub, why fix what isn't broken.

Best Football Poster
It was higher than 25m.


The half-yearly financial statement published by Lazio has revealed the full price that Inter paid for Joaquin Correa in the summer, according to a report in the Italian media.

As has been reported by FCInternews today, the final fee that was paid to the Biancocelesti at the end of the summer transfer window was €28.567 million.

With many transfers there is a reported fee but it takes some time until the specific numbers can be learned from the financial documents of the clubs.

Joaquin Correa’s fee is quite high when held up against what he has brought to the team so far this season but he is expected to remain at the club in the summer and will get another chance to prove his worth.

He was signed along with Edin Dzeko as part of a two-part replacement for Romelu Lukaku who had just left for Chelsea in the Premier League.
Click to expand...

And this sum doesn't even include the bonuses. 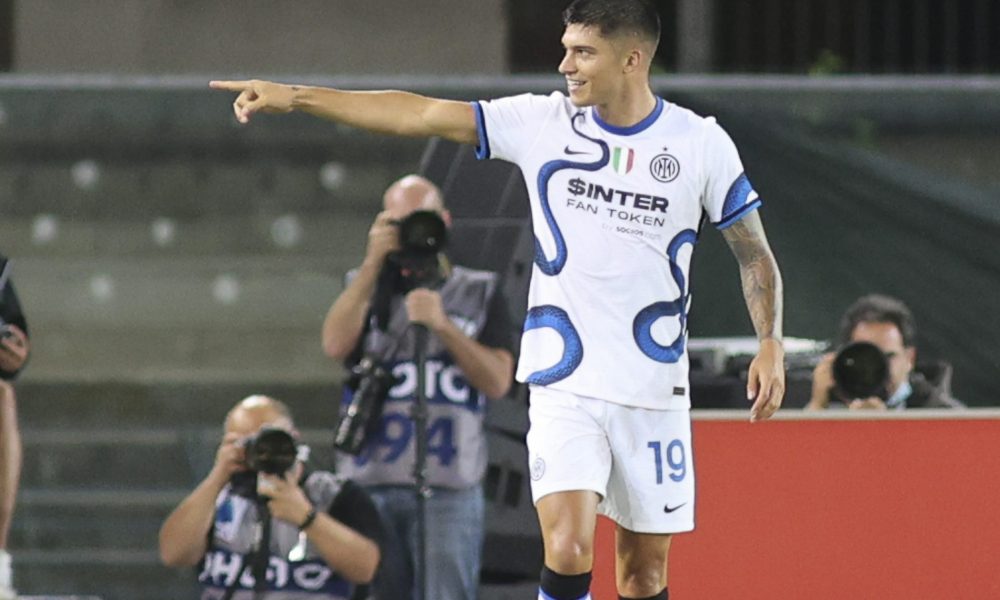 
Also if you want to compare him with anyone your guy is Felipe Anderson. Flair, an occasional good game and lots of inconsistency. His level is Lazio and even there he didn't look anything special.

10 years of FIF
Correa seem to struggle front of the goal and making that last key pass to make a really big difference, but he is still more dangerous and more unpredictable than Dzeko. It seem to be mental thing?

But Correa-Lautaro duo make more room for Lautaro to find more open spaces and now we have seen Lautaro again to get in the game more, eaven if Correa don’t score.

brehme1989 said:
Exactly. People put too much attention on the goal+assist thing for some reason. No idea where this fantasy football video game fusion mentality took over, it wasn't like this 10 years ago.

He still has a lot of room for improvement and he's probably not gonna get there ever, but he's a useful player.
Click to expand...

because today everything is about numbers, and nobody sees this type of things when other players open spaces just by positioning without of ball

Exactly my thought, guti was a legend, his vision was something else.

10 years of FIF
No defender will be distracted if he can't threaten anything. And being distractor alone without final ball ability is not enough for a team who aims for the championship. His redeeming point is he is the only player in the team who has pace and beating his defender. If we have more players who is fast or good at take on, Correa's value will diminish quickly.

show up big against Juve pls

Most Improved Member
Just do againt rube what you casually did playing for Lazio.