Projection to 86 points with a fuckup budget

Regardless of any projections, Inter have a history of getting less points in the second half of the season when it matters.

Last season was a big anomaly in that regard, but that coincided with Conte finally managed to get Eriksen integrated into the team, which certainly had some effect.

It will be very Interesting to see what happens this season after new year, if Inter will go back to old habits of underperforming in January or if they will somehow carry on (or up their game even further), without the injection of new blood (any quality transfer dontreally seem likely, considering the financial issues).

10 years of FIF
Yeah that's interesting. But I'd put emphasis on the recency here. This team resembles Conte's team much more than any previous one.

One caveat is we're gonna have (at least) those two extra CL matches in time when our schedule packed with important matches.

10 years of FIF
What a weekend!

I'm gonna add Atalanta as one of our rivals as they are right there.

Forum Supporter
10 years of FIF
track juve as well for the lols?

10 years of FIF
I added Juve but changed their target to 81p because those fuckers lose their budget to 86p too soon to have anything to follow here. Hahaha

Forum Supporter
10 years of FIF
hey cafe
can you update the juve target to 'please dont relegate us for fraud'? im not sure how to express that in terms of a budget

10 years of FIF
Nostradamus
Ever since this thread started we won all games, while Napoli had barely 4 points and 3 losses and Milan got 7 points out of 5 games. Jinx mode off

We should end the year and the "winter championship" with 2 more wins whilst one or both of Milan and Napoli will drop points as they face each other. Milan then faces a dangerous Empoli side away, whereas Napoli should beat Spezia at home. Atalanta vs Roma would be interesting, they're always fired up against them as they're their main ultars rivalry and then it's poor Genoa away. Should be 6 points for Atalanta as well.

Fiorentina shouldn't get 2 wins, I doubt they get even 1, with Sassuolo at home and Verona away, so from 30pts they can't close the gap to 4 from the CL spots, which leaves the gap for Juventus to go to 34pts and 2 wins behind Napoli after they should beat Bologna away and Cagliari at home.


It is now entirely up to us to make the Scudetto challenge interesting or a one horse race, unless you expect Atalanta to keep this up all the way. Until our game in Bergamo, we should aim for full marks. And there's no reason why we shouldn't win there with that kind of form, effectively allowing us to be conservative in the league and focus on Europe.

This only changes if Milan refuses to give up and gets 2 wins here.

10 years of FIF
Nostradamus
Let's make it a perfect December!

Looking at this, we can afford 7 games for casualties and I spot 9 fixtures where this could happen. Of course, you don't always beat the minnows, so extra caution is required.

But the 9 fixtures that could worry us are:
1. Lazio (H)
2. Atalanta (A) within a week from Lazio
3. Milan (H)
4. Napoli (A) within a week from the derby, three days before Liverpool (H), unclear if there's a Coppa game between Milan and Napoli fixture but quite possible
5. Sassuolo (H) right after the whole mess mentioned above and they're fucking unpredictable
6. Torino (A) tough ground, right after the Anfield game
7. Fiorentina (H) week after Torino, but possible we have the first Coppa semi final (Milan or Lazio most likely) right before
8. Juventus (A) international break after the game with Fiorentina, but if we manage to advance in the quarters of CL, this comes right before
9. Roma (H) last big game we have and they'll probably be chasing points to qualify for Europe. If we make CL semis, it's right before. No idea when 2nd leg of Coppa semi is played, so if we don't make CL semis, we may have the Coppa fixture there anyway.


Perfecting December and January means that we can be more relaxed in a very tough February. I would be pleasantly surprised if we have a perfect January. Bologna and Venezia won't be easy, but realistically we should be winning those games.

A perfect February probably secures us the Scudetto, assuming we do not make a loss in January but we still can afford to have casualties there.


The issue I see here is that the possible losses are very likely to come from immediate contenders and Juventus. Atalanta, Napoli and Juventus are all away, plus there's Milan and there's a chance we come out as losers to some of these given the scheduling. So it's important to avoid defeats in the big games.

Losing to Bologna, Torino and Sassuolo at home for example but winning 3 out of 4 and drawing the 4th in the big games shouldn't alarm us as much as losing to them directly, despite having a perfect record against all else.

It's been an exciting season thus far, hopefully it ends with satisfaction. It still could go either way. February will be the real test and the best way to get prepared for that is to avoid losing any points until the Derby.

Forum Supporter
10 years of FIF
or put another way, of the 20 remaining games, we need 13 wins to be likely to win the title. I think that's also a useful perspective on it?

.h. said:
or put another way, of the 20 remaining games, we need 13 wins to be likely to win the title. I think that's also a useful perspective on it?
Click to expand...

Yes, of course that's a given, but even if every win is worth 3 points, it matters a lot where the win comes from.

Overcoming rivals in the 6 pointer matchups will prove more essential as we approach the end. It will all depend on where they and we stand of course by then. If our gap from Milan is 12 points no one will care as much, but if it's 5 points it's going to hurt to have it close to two.

Forum Supporter
10 years of FIF
sure, agreed of course. But this whole thread is a crude approximation anyway, its just useful to mentally have a target in mind.

13 more wins puts us in a very good position - of 20 games. Nothing's guaranteed, of course.

I think Juve will make it to CL unfortunately. They manage to get these results, even though it was just Cagliari who's probably even worse than Genoa.

But it's probably going to be right.

It was expected that they'd get 4 points (X between them and beat the minnows) but they both drop an extra point here. While Atalanta dropped 5 points.

This was Napoli's 4th loss and we've just hit the season's half. I don't see them as contenders anymore, unless they somehow manage to have a 10+ win record after the break. The only club capable of doing that is Juventus which is why I do not discount them yet.

Shit tier lookout. Halfway there, so let's half the metric. 5 wins and/or 9 losses with no points collected:

We also have the possible Salerno shuffle of points that will ruin this chart and the overall table a bit, hopefully it doesn't end in shambles for the league (hint: it will).

This is meaningless at this stage as I mentioned earlier, but it's a good indication of how points may be distributed across the other teams.

What is also rather meaningless is to project the rest of the season based on what has happened yet. It serves as a platform, but it's not the defining moment. We weren't on track for 86 points last season for example as you will see below, at least based on this method.


I'll post the tables from this 19 matchday point of the previous 4 seasons and this one just to compare the overall picture. I'll use circles to show which teams are on track to achieve the target on each side of the table. So 4 draws, 2 wins (or maximum 6 point casualties) for contenders and less than 5 wins and/or more than 9 losses at the bottom. And yes, I don't care how silly it looks with the circling

Of course the final table will be added as well in order to see how it ends. 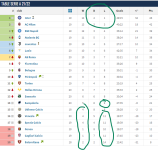 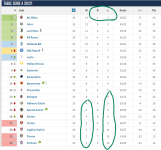 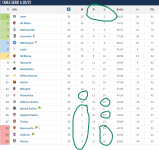 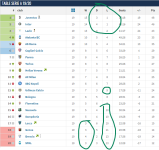 As a sidenote, I think we can all understand here that without the Covid break, Lazio would have been a contender in that season and it would have looked much different if we had to play midweek while they didn't. Instead, we all had to play midweek and the 5 subs rule was introduced, deflating Lazio out of the race and Atalanta caught up. 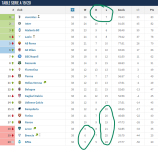 Another note here. Even if Juventus managed to suffer at most 12 casualties, their last three games were losses so we all know it could have looked even better for them. 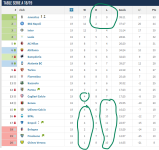 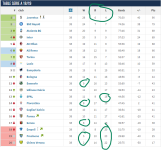 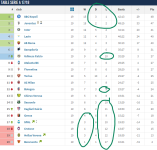 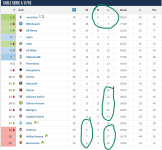 10 years of FIF
Changed Napoli's budget to 5 draws and 6 losses as they were out of losses already with the original 8D/4L budget.

But I agree that Napoli is probably out of the race. They have their injuries and their Osimhen, Koulibaly and Anguissa out for Africa Cup in January.

10 years of FIF
Nostradamus
Great win in a matchday that no one else lost points.