They will buy him in case they promoted? Why it's bad?

eduzee said:
They will buy him in case they promoted? Why it's bad?
Click to expand...

because they lost, so we will get no money

Best Forum Newcomer
Chievo have been kicked out of Serie B.

Best Forum Newcomer
Chievo's appeal has been rejected and Cosenza returns to Lega B.

Best Forum Newcomer
Chievo will come back in Terza Categoria, according to Pellissier.

10 years of FIF
FIF Special Ones
This kids a really interesting talent. He’s 6’7, can dribble surprisingly well for his height, great with his head and has a cannon of a shot. One to keep an eye on for sure.

10 years of FIF
Nostradamus
Reggina looking like a nice team. SPAL ain't half bad either.

Shame neither team can make it even to the playoffs.

10 years of FIF
Forum Supporter
The league needs Lecce back in Serie A (high attendance for a smaller club), so glad to see they're in a promotion spot. Pisa would be an interesting addition to the league. It's been 30 years since they were in the top flight.


Filippo I mean. By Brescia.

10 years of FIF
It'll be interesting to see how that one plays out. He had a clause in his contract that he couldn't be sacked if they were in the top 8. Supposedly they were trying to sack him for quite a while now.

Forum Supporter
10 years of FIF
He is in the playoff spots but Cellino still sacked him. Madness.

Lega Pro game, Modena top of the league 4pts clear, Imolese near the bottom.
There's only two games to go so this pretty much guarantees Modena a Serie B spot.

karma is a bitch

10 years of FIF
Nostradamus
Serie B excitements in the penultimate matchday.

Vicenza vs Lecce.
Vicenza needs the points to avoid instant relegation, Lecce is top of the league (68 pts), scores the opener in the 67th minute, their fans throw stuff at the Vicenza goalkeeper, game is paused for a long time. Vicenza equalizes with a PK in the 95th minute and Filippo Ranocchia scores his first goal of the season with a long range shot in the 103rd minute. That's with 14 minutes added time!

Meanwhile, Cremonese (65 pts) loses at home to Ascoli (59 pts), Brescia (63 pts) lost away to Cittadella who have nothing to play for, Monza (64 pts) enters auto-promotion territory with an easy 3-0 win over Benevento (63 pts) and Pisa (63 pts) fucks up against relegation battler Cosenza, 1-1 at home!


Lecce's next game is versus doomed Pordenone at home, so a lot of people assume it was fixed, since Lecce knew that their top spot wasn't at risk following the other results.
Lecce would have been Serie B champions with a win and hold a festa at home, but now they need to also secure 3 points, but that's irrelevant to people's minds. And they could have won as they had a great chance but their attacker messed up the final pass - and picked the wrong teammate. It was right before Vicenza's winner.


League table at the top League table at the bottom 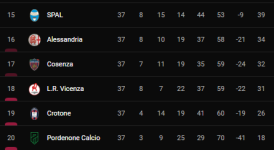 The infamous game highlights between Vicenza and Lecce

Cremonese has won 2-0 away at Como and secures promotion! Another Lombardy team! Their first trip to Serie A since 1996!

Vicenza is leading against Alessandria away 1-0, reaching their 34pts but sending them to Lega Pro! Vicenza will play against Cosenza in the playout for the last relegation spot! 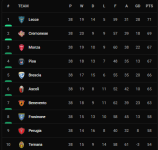 Serie A promotion Playoffs:
Monza and Pisa have byes.

Brescia vs Frosinone
Ascoli vs Benevento

I'd love to see Pisa. Same colors as us, too But three nerazzurri sides would be too much to handle for FIGC. I'm okay with Ascoli returning to Serie A, they have a great fanbase even if they hate us for legitimate reasons.