10 years of FIF
Most Diverse Poster
If we really get Lukaku, getting Chelsea would be fun. Especially since they have a centerback crisis right now
P

10 years of FIF
Our centreback crisis is just around the corner once Skriniar gets sold.

10 years of FIF
Most Diverse Poster
Oh I know that, brother. Just a few minutes ago I said getting Bremer but sacrificing Skriniar still doesn't fix what we gonna do with De Vrij. Extend him? Frantically search for a replacement next summer?

Forum Supporter
The greatest comeback for all times 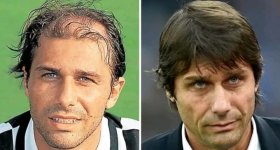 Forum Supporter
"I'm not only a member of hair club...."

Anyone seen the footage of the pre-season of Spurs? If even Son is gassed out you know you have to run a lot.

Conte is such a baby omg
P

Personally, I feel that is a strange position to take given the club he played for and Captained for most of his career were lying, thieving, cheating cunts and remain so to this day. It therefore follows that the same applies to him.
Last edited: Aug 5, 2022

RickyMaravilla'sRightFoot said:
Conte is such a baby omg
Click to expand...

he really is, but better that than being a pushover

10 years of FIF
Most Diverse Poster
Exactly, came to say the same thing. He has the hunger to win and he proved it at 3 clubs that he brings results. Why then should he let himself get buttfucked? I do think that if he stayed at Inter for one more season and Hakimi&Lukaku got sold, he'd bring 2 other players instead of Džeko and Correa. Well, maybe he'd bring Džeko, but Sanchez would be playing first team in that case, which would make us play better IMO.

Well, it's a hypotetical now. On one hand the club promised a lot to Conte, but that was before Covid. Now it is what it is, Covid and giving big wages to too many players are to blame.
P

10 years of FIF
He was not complaining when he got his 7 million golden handshake though.

10 years of FIF
Most Diverse Poster
He knows what he is owed. A lesson in life to never say no to extra money when leaving a job.

10 years of FIF
I still dont get why he got that money, he should be paying us for leaving and every other club that he leave that way...