Forum Supporter
A lot of rumors emerged these days about this guy and now Il Messaggero says, that is almost done. Biraghi 2.0 is coming.

The Italian media continues to follow the chase for Chelsea fullback Emerson Palmieri very closely, and it looks like we’re seeing the final stages of this saga.

Outlet Il Messaggero now reports that the Blues and Inter Milan have finally reached a general agreement for the left-back.

Their report says it will cost the Nerazzurri around €25m for the total operation, which includes a loan with an obligatory clause to buy.

It’s claimed that Emerson Palmieri has already said yes to Inter Milan, as he ‘can’t wait’ to return to Italy, where he’s previously featured for Palermo and Roma.

Reports from Italian newspapers on Wednesday morning had already claimed that a deal could be found for between €20m and €25m, so it makes sense that the clubs reached an agreement at this level.
Click to expand...

Seems to me like a worse version of Asamoah (as a solid starter) for some reason.
E

Forum Supporter
Almost never plays for Chelsea...so that may mean something. Rumours also of Inter interest in Hector Bellerin Arsenal, he had pace once, but since his bad injury about 1 yr ago he is very timid going forward and is not a very good defender as of late. 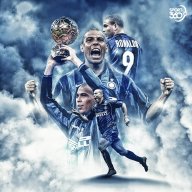 Too injury prone, not bad in attack and defence but nothing special gosens would be better for similar momey

Why aren't after Marcos Alonso? He is the perfect LWB in Conte system.

10 years of FIF
He's too old, costs over 30m€ and is practically useless after Conte leaves and we abandon 3-man defence.

10 years of FIF
Nostradamus
He's as bad in a 3 man system as he is in a 4 man system, no worries there.

He had potential at one point, we may catch glimpses of it but he's a dead weight candidate just like Lazaro and Dalbert.

This is just a bad deal whichever way you look at it. Opponents shut us down by making us push the ball out wide since our WBs provide little-to-no attacking presence. Hakimi will fix it for the right side, but if Palmieri is on the left side then they'll just push it to the left side.

10 years of FIF
Transfer Guru
My opinion on Emerson from the other thread below. I wouldn't mind this transfer if its a low cost loan with option and ONLY IF Emerson is our vice-LWB. We will still need a starting LWB, as Emerson is too much of a punt.


Bluenine said:
I remember wanting Emerson at Inter before he left for Chelsea. I have kept an eye out for him over here, coz I rated his potential. Emerson is an attacking LB (sorry to disappoint a few people here thinking he is good defensively), here is how I see his strengths and weaknesses:

Good:
- Great ball skills, typical Brazilian
- Likes to cut in, doesn't cross too much
- Good intensity, always a livewire when on the pitch
- Surprising good with long passes (he will have no problem finding Lukaku!)

Bad:
- He has been injured too often, and played little
- Yet to prove his potential ie still not enough end product largely due to the above
- Defensively not that great, better than Alonso but thats not saying much coz Alonso is shite defensively
- Shocking low number of goals & assists for an attacking LB. I just checked this - in the last 6 years, he has scored only 3 goals & 6 assists in 110 games in all competitions. Thats piss poor in term of playing time and end product. Just to compare, Biraghi in the same time has 5 goals and 19 assists in 193 games. To compare with someone world class, 21 year old TAA in the last 4 years has 11 goals & 38 assists in 142 games.


3 years ago, I thought Emerson had the potential to become world class. He hasn't developed at all from there, largely down to injuries and bench time at Chelsea. This transfer will be a punt, and however much I rated him before, at this moment I don't want Inter to take a punt at LWB. We have had enough of those.
Click to expand...

10 years of FIF
He seems the easiest and cheapest option, but I would still much rather sign Gosens.

Would not make me happy unless LOAN with OPTION to buy - because we sent the money on other targets.

DARi0 said:
He seems the easiest and cheapest option, but I would still much rather sign Gosens.

Would not make me happy unless LOAN with OPTION to buy - because we sent the money on other targets.
Click to expand...

According to Pedulla, Inter rate Gosens highly but so far Atalanta aren't willing to sell him.

10 years of FIF
Yeah I can guess Palmeri is quite lame option to Gosens. I've been saying since the start Emerson is just a backup option for LWB acquisition. I'd hope we find a better one before we need to come back for this.

If we sign a new lwb, he should be better than the ones we already have, otherwise it's a waste of resources that could be allocated elsewhere. And I'm not sure Emerson > Ashley young, the former United player is doing quite well (except one match).

CafeCordoba said:
He's too old, costs over 30m€ and is practically useless after Conte leaves and we abandon 3-man defence.
Click to expand...

He has limitations, but I don't think his age is one of them haha.

Forum Supporter
10 years of FIF
Best Overall Poster
Most Humorous Member
FIF Special Ones
Looking at our current LWB's, Young has been extended already and I believe Biraghi deserves to be redeemed - especially if we can organize a financially favorable deal. Perhaps a swap deal involving Dalbert, some quid pro quo plusvalenza deal, or even another loan. Basically, I'm happy for Biraghi to stay and I never want to see Dalbert again.

Asamoah probably died months ago and we just haven't told anyone. Either way, he seems finished at the club.

I'm happy to have Biraghi and Young competing as backup LWB's next season, given we find a new, starting LWB. That said, I certainly don't want Emerson, nor Alonso for that matter.

Despite my general reluctance towards Atalanta players, I feel like I can be talked more and more into Gosens. If we're going to make a move with our LWB situation, it needs to be a move that can actually make an impact, not just a move that spins the needle. Biraghi and/or Young are perfectly fine as rotational options. I don't really see what Emerson's going to bring to the table that would make the price he'll merit be worth it. From what I can tell, he's not injured right now, but he can't find a place in Chelsea's squad. Lampard is playing Azpilicueta out of position before he's playing Emerson. That doesn't necessarily mean Emerson is shit - different players succeed in different environments all the time - but it feels like the kind of gamble that isn't necessary to take, either.

Maybe I don't understand the rule properly, but since Biraghi is a club-trained player, isn't it the equivalent of having an extra slot in the roster? Theoretically having 5 WBs in the squad for cover seems optimal since it's such a physically demanding position. If we're going to sign another LWB, I would rather it be someone who's an undisputed starter, not Emerson.

10 years of FIF
It's basically like that. Let's say we have a kid, who's club-trained. You don't put this kid to start a match in CL. You can start a match with Biraghi (no matter what people think about him, he CAN BE used).

So, if we don't have Biraghi, we need to insert this kid to our A-list, or have a 24-player A-list (instead of 25). Having Biraghi on the squad is an effective way to mitigate the risks. 5 WBs are in my books a must for next season. Two for each sides and perhaps Young being the multipurpose WB backup for both wings.
E

Have to say I agree with what seems to be the prevailing thought in this thread, which is that I question whether Emerson is even an upgrade / sure starter. If he's our only option, then I don't want to spend the money we'd need to spend to get him. Loan with option would be fine, nothing more.

Guys to actually buy? I'd like to see Filip Kostic, as I understand Frankfurt are in a tough spot financially (though because of that it would need to be cash, not player swaps). If not Kostic then Gosens. If not Gosens then eh, I'd live with LWB by committee and upgrade other spots in the team until a better option came along.