Akanji used to be terrible but he has improved a lot in the last two years. He still remains hot and cold though. On his good days he can play like a top cb. Even then he needs to play alongside a leader in defense. His performances improved only when Dortmund brought back Hummels.

On his bad days though, oh dear Lord.

I would stay away.

10 years of FIF
I read from elsewhere (the same forum, same BVB fan) that Akanji is good but in BVB the structure is not perfect for CBs. Ie. high line in defence but not much protection from the midfield so it's not easy to look great CB.

I haven't watched BVB too much to remember how they play but I believe the people writing on that forum (it's Finnish football forum, some real intelligent writers there).

Based on these I don't believe Akanji would be a disaster. Our structure is more balanced, our defending isn't solo stuff from CBs where they would need to do heroics on a daily basis.

The question would be is Bremer the leader then? Because from the looks of this all, we try to sign Bremer and then another CB to replace Skriniar and De Vrij. This is a huge risk when it comes to the stability of our defence. Specially as we are about to introduce a change in our GK position bit by bit in the coming season.

imo those are some reason Dortmund buy both Sule and Schlotterbeck this season while Akanji still in the squad.

10 years of FIF
Perhaps but I think the main reason is Akanji is not willing to sign an extension so they want to sell him this summer (contract ends in 2023).

10 years of FIF
I could guess that Akanji is too expensive for us if Milenkovic can be had for 15m€ (I don't know if that's still true). And I definitely cannot say which would be a better signing, if the prices were let's say 15m€ Milenkovic and 20m€ Akanji.

Most Improved Member
After fiasco with Lazaro,I dont want anyone from that shitty Bundesliga unless is some top Bayern player.

10 years of FIF
Most Diverse Poster
Perišić wasn't a fiasco

Hakimi also came from Bundesliga. The league has some really great talents if your scouting department does its homework.

Most Improved Member
I am talking about unknown bums. Perisic and Hakimi were already top dogs.

bubba zanetti said:
I am talking about unknown bums. Perisic and Hakimi were already top dogs.
Click to expand...

This is a massive stretch. We paid 20M for Perisic. He wasn't in any way considered a top dog, especially after he flopped under Klopp.

Lisandro Martinez, one of the top passing CB in Europe

ADRossi said:
This is a massive stretch. We paid 20M for Perisic. He wasn't in any way considered a top dog, especially after he flopped under Klopp.
Click to expand...

He was top dog playing for NT I know that for sure. Best player in NT alongside Modrić since 2015. In a team with Rakitić, Mandzukić, Kovačić, Brozović etc you need to be top player to be best alongside Modrić. And Perisic was that.

CafeCordoba said:
It's now 3rd time Koulibaly is linked to Inter. ADL doesn't want to sell to Italy so interest doesn't mean anything.

Replacing De Vrij + Skriniar with Koulibaly and Bremer is the only scenario were we actually improve our defence this summer.
Click to expand...

Who's the source for that?

They say that, but as last summer showed, multiple players can be sold if a good enough offer comes

imo actually Lisandro Martinez more ready and proven than Bremer at high level. more reasonable to give Ajax those €50 M than give some amounts to tough Cairo for unproven Bremer. Summon @RotterdamNerazzurri @Materazzi_23 as Netherlands contributor 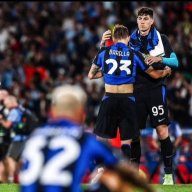