10 years of FIF
Wow, had Troy Deaney or Welbeck actually not missed some sitters, Watford would have been 4 or 5-3 up by now and survived. Villa survive, thankfully.

Forum Supporter
10 years of FIF
That was a shitshow. Not just the result, but the match. What a terrible game overall.

Good. Maybe now they will stop being absolute dickheads and extend Sanchez's loan for the EL.

10 years of FIF
FIF Special Ones
What has happened to the Pozzo brothers? It wasn’t long ago you would have said they were some of the best owners in football. Now all their teams have gone to shit and they don’t even own Granada anymore. Any idea what happened?

thatdude said:
What has happened to the Pozzo brothers? It wasn’t long ago you would have said they were some of the best owners in football. Now all their teams have gone to shit and they don’t even own Granada anymore. Any idea what happened?
Click to expand...

Well, in 2008 the Pozzo family sold their main company, which had one of its branches in udine (it also had branches in France and Spain).

I can't tell why exactly they decided to invest less on udinese, but I figure there's a connection, i guess it made sense to invest in udinese when it was free publicity for them and their company, not anymore after they sold the business.

Forum Supporter
10 years of FIF
I don't know why few are saying Covid helped us, we were in very good form before the break and had all the momentum, if anything it helped Chelsea as they were in poor form and got time to regroup.

Every team had their injured players back, so that helped.

Also we had very good form since we signed Bruno.

After 25 games, this was the table. After 26, Spurs were 1 point behind Chelsea in 4th position. 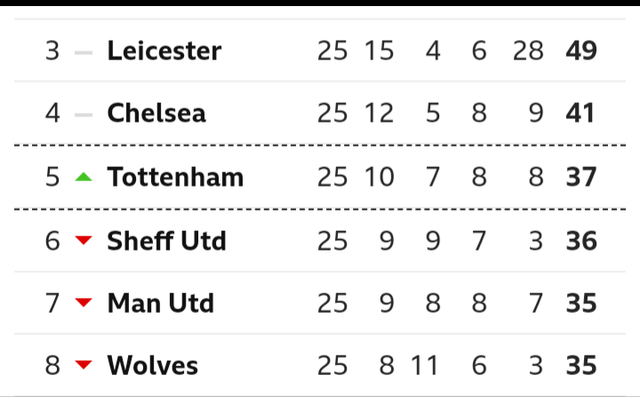 After 38 games, didn't think it was possible to finish 3rd. 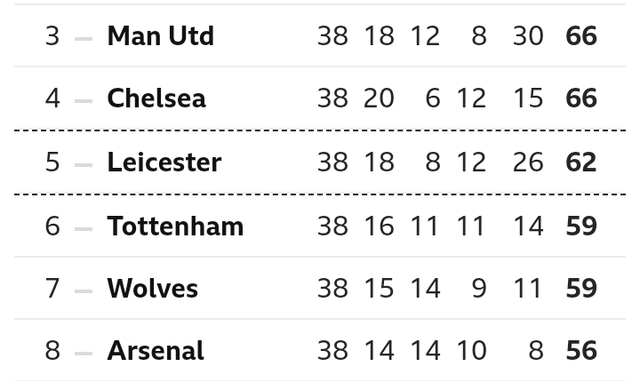 Also it's not just from Bruno or post restart we did well. We started the PL season terribly, From Oct 26th (International break) we picked up. Since that international break, we were 3rd in the table, with just 6 points behind City, scoring 3rd most goals and 3rd best defense.

10 years of FIF
Nostradamus
It mostly has to do with how Leicester coped after the break than Man Utd if anything.

Forum Supporter
10 years of FIF
Leicester were always destined to drop, not this significant though. They were pushing way above their level which wasn't sustainable. Their form is just Vardy's form, if he scores they win, if he isn't in the game they will struggle.

monster09 said:
Leicester were always destined to drop, not this significant though. They were pushing way above their level which wasn't sustainable. Their form is just Vardy's form, if he scores they win, if he isn't in the game they will struggle.
Click to expand...

That kinda won them the league not so long ago

Forum Supporter
10 years of FIF
If we forget how good Mahrez and Kante were in that season. Mahrez was their best attacker.

monster09 said:
If we forget how good Mahrez and Kante were in that season. Mahrez was their best attacker.
Click to expand...

Sure, but the sentiment was that they'd eventually not sustain that form.

Similar to Atalanta now in Italy where it's been like 2+ years.

Forum Supporter
10 years of FIF
Atalanta are playing as good as their points tally and goals tally show, they create by far the most chances in League.

This Leicester team relies on Vardy way too much and their form was as good or bad as Vardy's form. If vardy kept that form, he would have scored 40+ league goals which was never the case.

When they won the title, they had Vardy and 2 near world class players, Mahrez and Kante.

10 years of FIF
The biggest blow to Leicester were the injuries and absences they had to deal with towards the end, especially being without James Maddison, Chilwell, Soyuncu, Pereira etc.

Brendan Rogers bottled it again though, just like when Liverpool lost the league, they really fucked up with Leicester not getting CL despite being comfortably ahead of the rest in the top 3/4 for most the season.

Disappointed as anyone to see Man Utd and Solskjaer make it, but tbf Leicester were already in free-fall from winter, before the break. I think the second half of their season was just regression to the mean, they were over-performing in the first half and too reliant on Vardy.

I was definitely rooting for a scenario where Leicester would've made it, so it's disappointing that they fell hard enough in the end - injuries to key players duly noted - to miss out in the end.

Anyway, I'm sure next year will once again be a season where I have high expectations for Everton to make a move up the table after a good summer, and then come May they'll be in 10th place again and I'll look stupid. That's definitely one you can set your watch to.

Etihad Airways played a decisive role in overturning Manchester City’s two-year ban from the Champions League football tournament, with the United Arab Emirates-based carrier leaping to the defence of the English Premier League club owned by a member of the country's ruling family.

On Tuesday, the Court of Arbitration for Sport in Switzerland, the body considered the final arbiter of global sports disputes, released the full ruling on its decision to lift the unprecedented sanction imposed on Man City by Uefa, European football’s governing body.

Uefa had sought to punish the club after concluding that more than £200m of sponsorship deals with two Abu-Dhabi-based groups — the carrier Etihad and telecommunications company Etisalat — had been provided by a company controlled by Man City owner Sheikh Mansour bin Zayed al-Nahyan, the billionaire who is also deputy prime minister of the UAE.

Uefa based its case around leaked internal emails obtained by an alleged computer hacker that appeared to show that club executives had discussed ways to skirt so-called “financial fair play” rules intended to ensure clubs do not overspend on players in the pursuit of success.*

The CAS panel found these emails did not provide enough evidence to substantiate Uefa’s findings, especially after Etihad’s top executives, such as chief executive Tony Douglas, provided witness statements to argue the sponsorship deals were genuine.*

It added that Uefa’s arguments would “require a conclusion that the evidence of several high-ranking officials of large international commercial enterprises such as . . . Mr Douglas were false . . . This conclusion is not warranted based on the evidence available.”

A majority on the CAS panel was not “comfortably satisfied” that “arrangements discussed in the leaked emails were in fact executed”, and there was not enough evidence to show that Sheikh Mansour “directly” took on any of Etihad’s sponsorship obligations.*

The case highlights how Abu Dhabi’s biggest companies have supported the ambitions of Manchester City since Sheikh Mansour acquired the team in 2008.

Critics alleged the owner, the brother of Sheikh Mohammed bin Zayed al-Nahyan, the de facto ruler of the UAE, has used the club to burnish the Middle Eastern country’s soft power through dominating the world’s favourite sport.

Etihad agreed to pay sponsorship and bonuses of more than £220m over three seasons to the end of 2015-16, making it one of the biggest endorsement deals in football history.

CAS determined that the charges brought in relation to the sponsorship contracts with Etisalat were “time barred”, meaning that Uefa had not brought its case within the required five-year time period for the sanctions to apply even if there had been wrongdoing.

However, CAS rejected City’s argument that the financial implications of the pandemic, which has forced clubs to shut fans out of stadiums, should have resulted in a reduction in the size of €10m fine that was imposed for a lack of co-operation with Uefa’s investigators.*
Click to expand...