new sponsor for the next 3 years 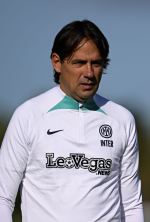 IM21 said:
new sponsor for the next 3 years

This is a joke. Right?

ADRossi said:
This is a joke. Right?
Click to expand...

Nope. Looks like it replaced Suning on the training kits. 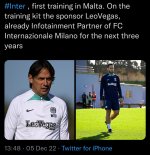 Looks like shit, sounds like shady af, but at least it's a Sweden-based MGM brand so you'd think there's bound to be stability. These types of sponsors really hurt the brand image tho.

Steven zhang put something on insta there from stone Island and it mentions sports company in the top left.

Stone Island x Inter would be

seems so - we`re in the state where we have online casino & sports betting website on our shirt!


Harpsabu said:
I swear to fuck if stone island are making our kits ill not buy a single one
Click to expand...

why? what`s wrong with stone island? This brand is very popular in ULTRAs wear over here.

DARi0 said:
seems so - we`re in the state where we have online casino & sports betting website on our shirt!


why? what`s wrong with stone island? This brand is very popular in ULTRAs wear over here.
Click to expand...

Exactly. Lol the type of people who wear it. Its pure chavs who wear it where I'm from.

10 years of FIF
Cryptos or betting

I for one prefer betting/ gambling to promoting an outright ponzi....

Also i hope they re only on our training kits... looks atrocious

10 years of FIF
Betting is so engraved in sports. Who cares.

According to reports, Inter risk seeing their finances hit by the failed payments from sponsor DigitalBits, so their rating could be reduced to ‘junk bond.’

The Nerazzurri had an agreement with DigitalBits to be their main shirt sponsor, but the cryptocurrency company missed payments and then attempts to work out a new plan also failed.

Now Calcio e Finanza claim that CreditWatch see this having a knock-on effect for the value of their Inter Media and Communication S.p.A. bonds.

If confirmed, Standard and Poor’s Global Ratings could bring down Inter’s rating to junk bond status.

Inter are under a great deal of pressure now to find a new and reliable sponsorship contract to fill the gap left by DigitalBits.

The Inter bond is currently in the B level, so already considered ‘highly speculative’ on financial markets and that could deteriorate further.

The total contract is worth €24m, but Inter have already removed all trace of the DigitalBits sponsorship from their jerseys, website and advertising boards.
Click to expand...

Fucking amateurs.
Whoever rescinded Pirelli's legendary, iconic, and optically beautiful albeit lowish partnership for this obvious scam (Antonello?) needs to have his head cut off and served on a platter.
On top of the jerseys, and in turn our outward image looking like pure shit, we've literally taken massive steps backwards, worsening our already poor financial status with whatever this sponsorship was supposed to be.

Of course, obligatory; Fuck Suning, but still - I'm sure they pushed for something 'else' and more lucrative than Pirelli, but anyone should have expected this to be a disaster from the get-go.
Last edited: Dec 9, 2022

_OC_ said:
Fucking amateurs.
Whoever rescinded Pirelli's legendary, iconic, and optically beautiful albeit lowish partnership for this obvious scam (Antonello?) needs to have his head cut off and served on a platter.
We've actually taken massive steps backwards, worsening our financial status, with this sponsorship, on top of it looking like shit.

"Get off my lawn" vibes.
But you're absolutely correct. And it's Zhang you have to blame here.

We need new owners, are the saudis back on the table or what